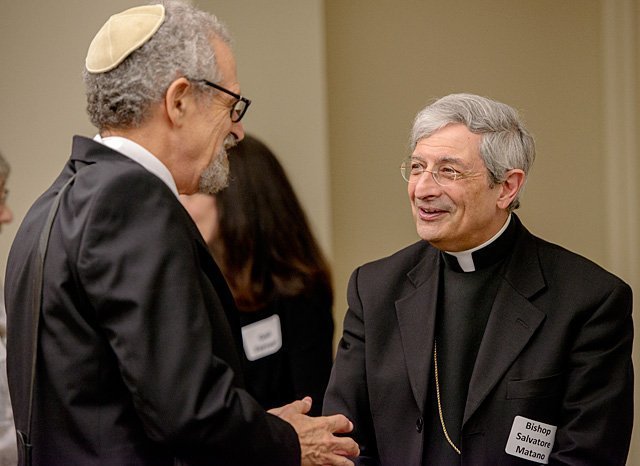 Bishop Salvatore R. Matano visits with Rabbi Alan Katz during a reception held by the Jewish Community Federation to welcome the bishop to Rochester June 25 at the federation's offices. Rabbi Katz is the senior rabbi at Temple Sinai in Penfield.

ROCHESTER — Citing "the beautiful rapport you (began) to develop so many years ago and brought to this moment," Bishop Salvatore R. Matano voiced his intent June 25 to continue the ongoing cooperation between Rochester-area Catholic and Jewish leaders.

Bishop Matano delivered the remarks during the latest in a series of receptions formally welcoming him to Rochester. The event, held at the Jewish Federation of Greater Rochester’s offices on East Avenue, was presented by the federation and attended by approximately 35 local leaders from both faith communities.

Speakers expressed their desire for Bishop Matano — who was installed Jan. 3 as ninth Bishop of Rochester — to build on the legacy of Catholic-Jewish cooperation that has strengthened in recent decades.

"We are quite proud of the extraordinary history of interfaith relations here in Rochester. This is a very meaningful and special relationship we’ve developed," said Michael Grossman, president of the Jewish Federation, who added that he hopes Bishop Matano "will help to create even more enthusiasm for all we’re doing."

Rabbi Amy Sapowith, of Temple Sinai in Penfield, noted her personal collaborations with Catholics — from the parish community at St. Joseph Parish in Penfield, to Catholic Family Center, to the Sisters of St. Joseph, with whom she recently began working on an effort aimed at ending human trafficking.

"There is much to be done, and we do it better together," added Rabbi Sapowith, who also serves as the community-relations chair for the Jewish Federation.

Rabbi Debbi Till, the federation’s community-relations director, listed numerous milestones in cooperative efforts between Rochester-area Jewish and Catholic communities. The signature event took place on May 8, 1996, when the Diocese of Rochester entered into a historic pact with the Jewish Federation and Rochester Board of Rabbis.

By signing what is known as the The Rochester Agreement, the communities pledged collaboration to promote understanding of both faiths and to combat religious intolerance and prejudice. This 1996 development also set the stage for the similarly designed Catholic-Muslim Agreement of Understanding and Cooperation in 2003. Bishop Emeritus Matthew H. Clark signed both documents and played key roles in bringing the agreements to fruition.

Rabbi Till noted that The Rochester Agreement was the first in any United States city to formalize working relationships between Catholic and Jewish entities.

"This is a commitment we uphold with pride and distinction," Rabbi Sapowith remarked.

Rabbi Till also cited local interfaith efforts that have begun in recent decades, including: regular interfaith and Bible-study meetings; a 1998 pilgrimage to Israel and a similar trip to Rome in 2005, both jointly led by Bishop Clark and Rabbi Alan Katz of Temple Sinai; shared remembrance events in 2002 and 2011 of the terrorist attacks of Sept. 11, 2001; the 2006 launch of the Brennan-Goldman Institute, which promotes interfaith dialogue and educational opportunities; and a "Dignity of Difference" event in 2013 at Rochester Institute of Technology, which drew hundreds of people to learn more about the basis for the world’s many religions.

"We have countless areas of mutual concern and interest," Rabbi Till said.

Bishop Matano, the final speaker for the June 25 gathering, said the ability for humans to work together comes naturally. "Is there not within us an innate desire to cooperate?" he asked.

The bishop ended by saying he’s looking forward to enhancing cooperation among the Catholic and Jewish communities.

"Doing that work is going to be so much more joyous because of wonderful people like you," Bishop Matano told the audience.