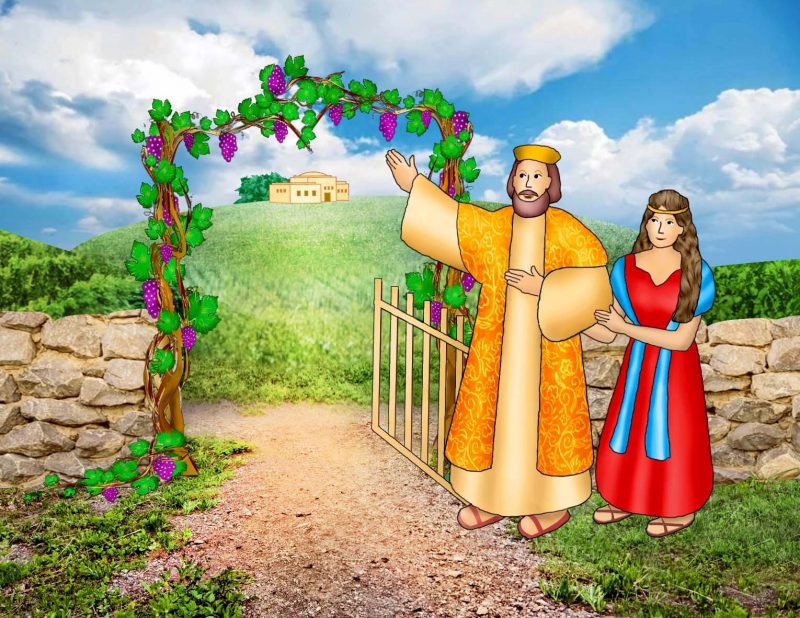 This is the artwork for Kids' Chronicle for June 13, 2022. (CNS illustration by Linda Rivers)

A man named Naboth lived in the city of Jezreel, which was located in the northern kingdom of Israel.

Naboth owned a vineyard right next to the palace of King Ahab, the ruler of Israel’s northern kingdom who lived in the capital city of Samaria.

One day, the king came to talk to Naboth about his vineyard.

“The Lord forbid that I should give you my ancestral heritage,” Naboth said in refusing the king’s request.

King Ahab acted like a pouting child who didn’t get his way. He went back to his palace, climbed into his bed and refused to eat.

His wife, the pagan Queen Jezebel, came to him.

“Why are you so angry that you will not eat?” she asked.

“Because I spoke to Naboth the Jezreelite and said to him, ‘Sell me your vineyard, or, if you prefer, I will give you a vineyard in exchange.’ But he refused to let me have his vineyard,” the king said.

“A fine ruler over Israel you are indeed!” she scoffed. “Get up. Eat and be cheerful. I will obtain the vineyard of Naboth the Jezreelite for you.”

Queen Jezebel hatched an evil plan. She sent letters in the king’s name to the elders and nobles, telling them to proclaim a fast and set Naboth at the head of the people.

“Next,” the queen wrote, “get two scoundrels to face him and accuse him of having cursed God and king. Then take him out and stone him to death.”

The elders and nobles did just as they had been told. When the evil deed was done, they sent word to Jezebel that Naboth had been stoned to death.

When Jezebel learned that Naboth was dead, she returned to Ahab.

“Go on, take possession of the vineyard of Naboth the Jezreelite that he refused to sell you, because Naboth is not alive, but dead,” she told the king.

Then King Ahab arose and started off toward the vineyard to take possession of it.

1. What did King Ahab want?

2. Who helped him get what he wanted?

Why was Israel divided into two kingdoms?

In 1 Kings 11, we read that King Solomon, David’s son, had many pagan wives who turned his heart away from God.

This made God angry. Since Solomon did not keep God’s covenant and statutes, God told him that the kingdom of Israel would be torn away from him and given to his servant.

But, God said, for the sake of David, who followed God with his whole heart, this would not happen to Solomon but rather to his successor.

And, for David’s sake and that of Jerusalem, God said he would not tear away the entire kingdom from Solomon’s heir. The kings of David’s line would keep one tribe of Israel, while the other 10 would be given to Solomon’s servant.

Also in 1 Kings 11, we read that the prophet Ahijah told a man named Jeroboam — a servant of Solomon’s — that he would be given 10 of the 12 tribes of Israel and become their king.

When Solomon died, his son, Rehoboam, became king. Rehoboam was harsh and didn’t listen to the people, so they rebelled against him.

Then God’s words through Ahijah came true. Ten of the tribes of Israel rejected Rehoboam and made Jeroboam their king. Rehoboam continued to rule his own tribe, Judah, plus the tribe of Benjamin.

After the kingdom of Israel was divided, Rehoboam’s portion in the south became known as Judah.

St. John Fisher was born in 1469 in Yorkshire, England. He became a distinguished scholar at Cambridge University and was ordained a priest at age 22.

John held several important offices: chaplain to a king’s mother; vice chancellor and chancellor of Cambridge; bishop of Rochester, England; and counselor to Catherine of Aragon during King Henry VIII’s divorce proceedings against her.

John angered the king by refusing to recognize him as head of the church in England. When the pope named John a cardinal, King Henry became even more angry and ordered John to be beheaded.

Using the hints provided, answer the questions about King Ahab and Queen Jezebel.