John baptizes for the forgiveness of sins - Catholic Courier 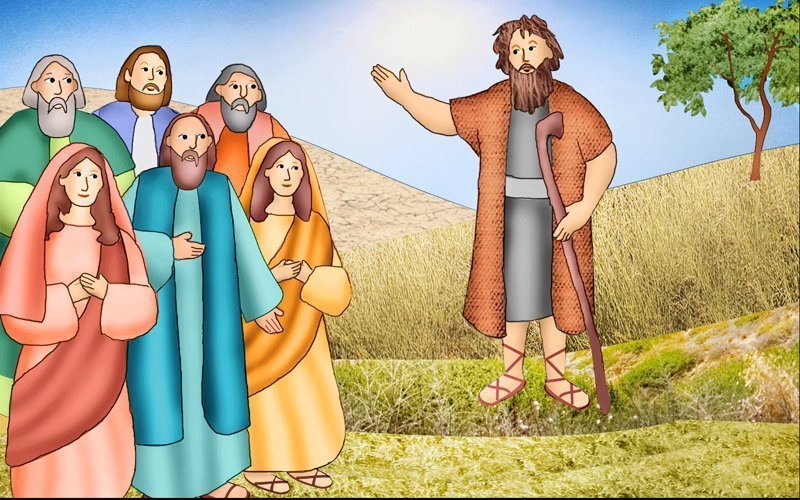 John baptizes for the forgiveness of sins

John baptizes for the forgiveness of sins

The priest Zechariah and his wife, Elizabeth, had a son named John.

In the 15th year of the reign of Tiberius Caesar, the word of God came to John while he was living in the desert.

John began traveling throughout the region of the Jordan River, telling all who would listen that they needed to repent and be baptized for the forgiveness of their sins.

John fulfilled what was written about in the Book of Isaiah: “A voice of one crying out in the desert: ‘Prepare the way of the Lord, make straight his paths. Every valley shall be filled and every mountain and hill shall be made low. The winding roads shall be made straight, and the rough ways made smooth, and all flesh shall see the salvation of God.’”

Crowds of people came to be baptized by John.

“You brood of vipers!” he said to the people. “Who warned you to flee from the coming wrath? Produce good fruits as evidence of your repentance. ‚Ä¶ Even now the ax lies at the root of the trees. Therefore every tree that does not produce good fruit will be cut down and thrown into the fire.”

People of all walks of life asked John what they should do. He told people to share their second tunics and their food with others. He told tax collectors not to collect more than was required, and he told soldiers not to falsely accuse people and to be satisfied with their wages.

Those who came to John for baptism started to wonder if he was the Messiah that God has promised his people.

John made it clear that the Messiah was still to come.

“I am baptizing you with water, but one mightier than I is coming,” John told them. “I am not worthy to loosen the thongs of his sandals. He will baptize you with the Holy Spirit and fire. His winnowing fan is in his hand to clear his threshing floor and to gather the wheat into his barn, but the chaff he will burn with unquenchable fire.”

1. Where was John living when he heard the call of God?

2. Who did people think John could be?

ESSAY: Advent is a time of watching and waiting for the Messiah. How do you and your family celebrate the coming of the Messiah during Advent?

There are many prophesies throughout the Old Testament that predict the coming of Jesus as the Messiah, and many of them are found in the Book of Isaiah.

“Therefore the Lord himself will give you a sign; the young woman, pregnant and about to bear a son, shall name him Emmanuel” (Is 7:14).

“For a child is born to us, a son is given to us; upon his shoulder dominion rests. They name him Wonder-Counselor, God-Hero, Father-Forever, Prince of Peace” (Is 9:5).

Isaiah 60:6 refers to the Magi visiting the infant Jesus: “Caravans of camels shall cover you, dromedaries of Midian and Ephah; all from Sheba shall come bearing gold and frankincense, and heralding the praises of the Lord.”

And Isaiah 53 talks about Jesus dying for our sins.

“But he was pierced for our sins, crushed for our iniquity. He bore the punishment that makes us whole, by his wounds we were healed. We had all gone astray like sheep, all following our own way; but the Lord laid upon him the guilt of us all” (Is 53:5-6).

St. John of Kanty was born in Poland in 1390. He spent most of his life as a professor of sacred Scripture at the University of Krakow.

John also was a parish priest for a short time. But this was not a position that he had requested. It is said that he was forced into it because someone at the university was jealous of his popularity.

After his tenure at the parish, he returned to the university, where he impressed upon his students the importance of practicing moderation and good manners when facing controversies.

John had a reputation for holiness and was famous for his generosity to the poor of Krakow.

Unscramble the letters in each word and arrange the words to form a quotation from the children’s story.