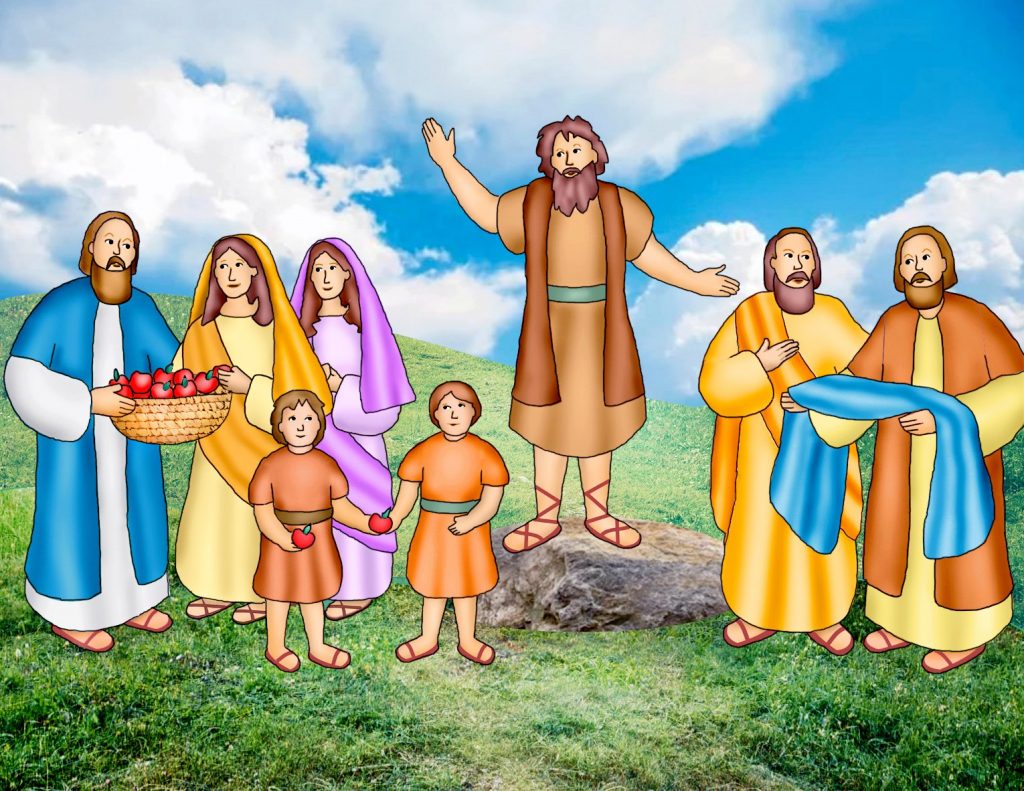 This is the artwork for Kids' Chronicle for Dec. 12, 2021. (CNS illustration by Linda Rivers)

In the 15th year of Tiberius Caesar’s reign, the word of God came to Zechariah’s son, John, in the desert.

John traveled throughout Jordan, proclaiming a baptism of repentance for the forgiveness of sins. This fulfilled a prophecy found in the Book of Isaiah:

“A voice of one crying out in the desert: ‘Prepare the way of the Lord, make straight his paths. Every valley shall be filled, and every mountain and hill shall be made low. The winding roads shall be made straight, and the rough ways made smooth, and all flesh shall see the salvation of God.'”

Crowds of people came to John to be baptized.

“You brood of vipers! Who warned you to flee from the coming wrath?” he asked.

He told the people he was baptizing that they needed to produce good fruits as a sign of their repentance.

“Every tree that does not produce good fruit will be cut down and thrown into the fire,” he warned.

“What should we do?” the people asked.

“Whoever has two cloaks should share with the person who has none. And whoever has food should do likewise,” John answered.

Tax collectors and soldiers also came to be baptized. When they asked John what they should do, he told the tax collectors not to collect more than was prescribed, and he told the soldiers not to falsely accuse anyone, to be satisfied with their wages and not to practice extortion.

People started asking in their hearts if John was the Messiah.

“I am baptizing you with water, but one mightier than I is coming,” John said. “I am not worthy to loosen the thongs of his sandals. He will baptize you with the Holy Spirit and fire. His winnowing fan is in his hand to clear his threshing floor and to gather the wheat into his barn, but the chaff he will burn with unquenchable fire.”

After the people were baptized, Jesus also was baptized. As he was praying, heaven opened, and the Holy Spirit descended upon him in the form of a dove.

A voice from heaven said, “You are my beloved Son; with you I am well pleased.”

ESSAY: Describe a time when you were asked to give an important message to someone.

When we hear the name Gabriel, we recall how this messenger angel visited Mary to announce that she would become the mother of Jesus.

But before he visited Mary, Gabriel delivered a special message about another baby who was to be born.

In Luke 1:5-25, we read that Zechariah the priest had entered the sanctuary of the Lord to burn incense when Gabriel appeared to him.

“Your prayer has been heard,” Gabriel told Zechariah. “Your wife Elizabeth will bear you a son, and you shall name him John.”

Zechariah did not believe what he had heard. He and his wife were very old, and Elizabeth couldn’t have children.

Gabriel did not appreciate Zechariah’s doubt, so he made it so Zechariah couldn’t talk until after the baby was born.

Zechariah fulfilled his priestly duties and then returned home. Not long after, Elizabeth became pregnant, just as Gabriel had said.

The time finally came for Elizabeth to have her baby. She gave birth to a boy whom she and Zechariah named John.

We know him by the name John the Baptist.

St. Melania was born into a wealthy Roman family in the fourth century and was married to a relative against her will.

She eventually won over her husband to her lifestyle of religious devotion and austerity. They sold property to help the poor and the church, and they also freed thousands of slaves. When the Visigoths invaded, they went to North Africa, where she endowed two religious houses.

They went to Jerusalem in 417. After her husband died, Melania founded a women’s community on the Mount of Olives and shared their life of prayer and good works.

Using the hints provided, put a T next to the sentences about John the Baptist that are true and an F next to the ones that are false.