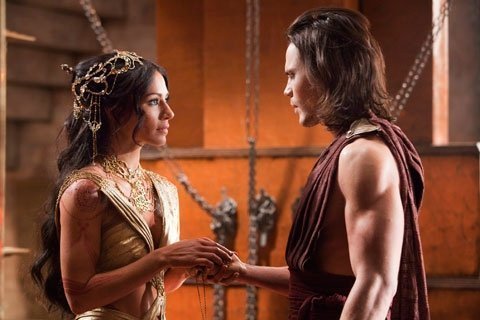 NEW YORK (CNS) — Thanks in no small measure to the magic of movies, Tarzan is the character most closely associated with author Edgar Rice Burroughs (1875-1950). Yet it’s one of Burroughs’ lesser-known heroes — introduced in his first novel, serially published in 1912 — that a group of 21st-century filmmakers have chosen to bring to the screen in a mega-budgeted, sci-fi epic.

A risky and on the whole successful venture, "John Carter" (Disney) was adapted from "A Princess of Mars," the first of 11 books Burroughs centered on an ex-Confederate captain who is propelled to the Red Planet where he becomes embroiled in a war between two city states and falls in love with a comely royal.

Faithful to its source material, the film is crammed with species, plotlines and pseudoscientific jargon that multiple generations of readers and moviegoers will find familiar. And although it doesn’t hang together logically, its gaps are of the kind that the folks in Hollywood are expert at papering over.

The particulars of this melange of sci-fi tropes are difficult to circumscribe.

Carter (Taylor Kitsch) arrives on Mars — "Barsoom" to its inhabitants — during a turbulent period in the planet’s history. The ecosystem is rapidly deteriorating and two powers, Helium and Zadonga, are fighting a protracted war. Between them is a race of green, four-armed creatures with tusks called Tharks, one of whom, Tars Tarkas (Willem Dafoe), finds Carter after he’s mysteriously plunked down on a dry lakebed having gained superhuman powers such as the gravity-defying ability to leap long distances.

Originally from Virginia, Carter is first encountered in New York City in 1881 having amassed a great fortune. He relates his incredible Mars odyssey in a journal read by his nephew and heir, the budding writer Edgar Rice Burroughs (Daryl Sabara). Marked by the trauma of America’s Civil War, Carter is a precursor to Indiana Jones, Luke Skywalker, and other nobly intrepid protagonists. He’s ever willing to risk his life for others and quick to stand up for the defenseless.

Of the many fascinating creatures and contraptions Carter encounters on Mars, none is more dazzling than Dejah Thoris (Lynn Collins), the princess of Helium, who is being forced to marry the puppet leader of Zadonga to end the fighting and unify the planet. A handful of immortal beings called Therns are manipulating events.

Director Andrew Stanton and his team niftily bring the story strands together in the end. Stanton’s experience creating animated fare such as "Wall-E" and "Finding Nemo" at Pixar clearly benefits his first live-action film. He’s accustomed to the challenge of crafting sui generis worlds without the luxury of justifying or explaining their existence.

In addition to an unwieldy plot, obstacles to success include a rather bland lead actor, a protracted running time, and less-than-scintillating dialogue used to break up the battle sequences, which are, of course, tailor-made for 3-D. Against all odds, it works. Poised to become the first blockbuster of the season, "John Carter" marries the appeal of a pulp serial with cutting-edge filmmaking techniques.

While there’s relatively little of concern in the picture’s content, given the elements listed below, this feature is likely best for older teens and up.

The film contains considerable, sometimes intense, action violence, scenes of cruelty, fleeting toilet humor, at least one use of profanity and several instances of crass language. The Catholic News Service classification is A-II — adults and adolescents. The Motion Picture Association of America rating is PG-13 — parents strongly cautioned. Some material may be inappropriate for children under 13.