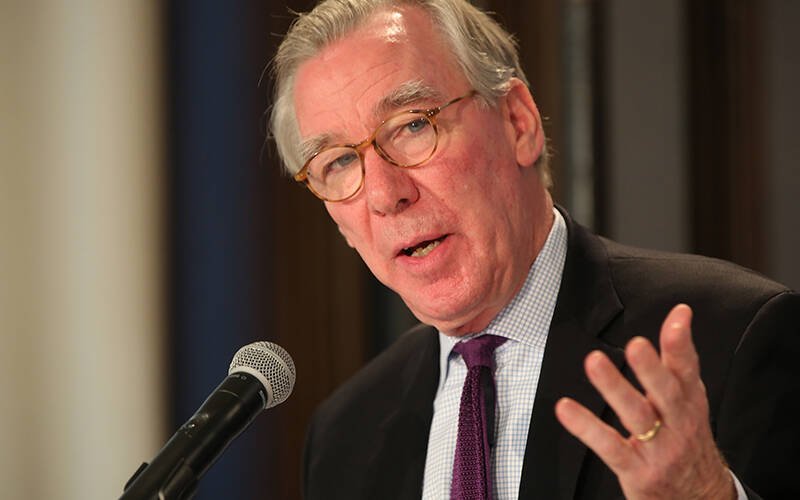 WASHINGTON (CNS) — John Garvey, president of The Catholic University of America in Washington since 2010, announced Sept. 22 that he will be stepping down from the role he described as “an honor and a privilege” at the end of June.

The 72-year-old, who is the university’s third lay president, said in a letter to the university community that he initially hoped to “contribute something to building up the institution” when he started his position and “did not foresee how much I would fall in love with it.”

Garvey, a constitutional law expert, former law school professor and dean of Boston College Law School, said he started talking with the university’s board of trustees about stepping down about six months ago and the board had recently accepted his decision.

In looking back over the past 11 years, he said the university has seen an increase in student retention, successful fundraising, campus renovation and new construction, but he also highlighted the impact of COVID-19 on the university, calling it “one of the most difficult crises in the university’s 134-year history.”

In the letter, he said the university got through the medical and financial challenges of the pandemic “through the intelligence, hard work, and charity of our people.” He also said he was thankful he had the opportunity to lead the university through that time, saying it gave him “the chance to see close up what makes the school so special.”

During his inaugural address, Garvey promised to promote a “serious Catholic intellectual culture” by hiring deans, faculty and staff committed to the vision of Catholic higher education.

And that’s an ideal he remained committed to, according to Victor Smith, chairman of the university’s board of trustees.

In a Sept. 22 statement, Smith said Garvey’s plans for leading Catholic University forward have been grounded in Vatican documents on Catholic universities such as “Ex Corde Ecclesiae” and “Veritatis Gaudium.”

Smith said Garvey’s hires at the university have “ensured the advancement of the Catholic intellectual life on this campus for generations.” He also said Garvey was instrumental in expanding lay participation and leadership in the school’s board of trustees.

He praised Garvey’s leadership in the university’s fundraising, helping it raise more than $500 million in gifts and grants, growing the school’s assets to nearly $1 billion and raising $112 million in research grants in 2020.

Along with the usual work of university leadership, Garvey has been teaching a course every year to freshmen students, which he describes as the “best part of my job.”

He also said that living on the university’s campus has allowed him to see students through out the day, including when they come to “borrow our sleds and walk our dog.”

“We attend their concerts and games, work with them on service days, and march with them for life and other worthy causes. These are daily occurrences, and every day they give me just a little more pride in our university,” he wrote.

Quoting St. John Henry Newman, someone he quoted when he started this job and throughout his tenure, Garvey said that the work “must employ younger minds and stronger lives than mine.”

He added that for him personally, “the time has come to turn the responsibility over to those younger minds and stronger lives.”

Garvey, who is a father, grandfather, author and monthly columnist for Catholic News Service, said he is looking forward to spending more time with his family once he steps down from being president.

He told The Washington Post that he and his wife, Jeanne, are taking Italian classes so they can eventually move to Italy, where Garvey plans to teach at Catholic University’s Rome campus.

A search has been launched to hire a new president by July 1.