John has visions of heaven and earth - Catholic Courier 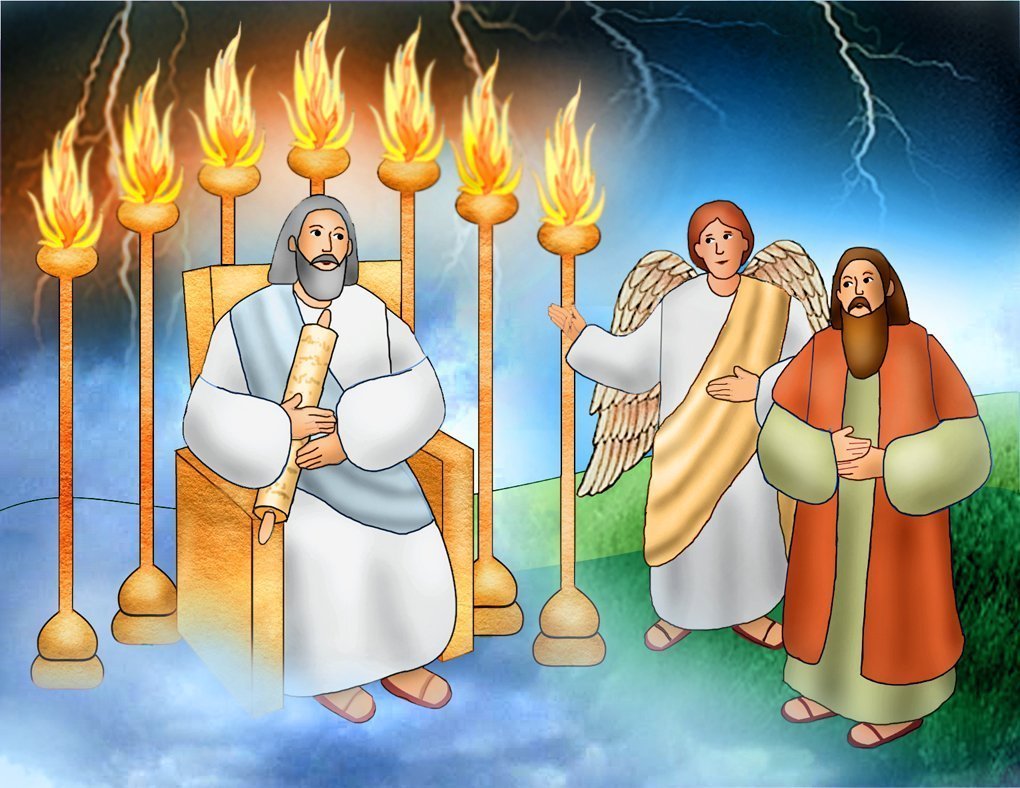 John has visions of heaven and eartht

John has visions of heaven and earth

When John was imprisoned on the island of Patmos, an angel appeared before him and told him to write letters to seven of the churches in Asia. “Behold, he is coming amid the clouds,” John wrote, “and every eye will see him, even those who pierced him.”

John explained how his visions from God started. He was praying on the Lord’s day when he heard a voice that sounded like a loud trumpet. When he turned toward the voice, he saw seven golden lampstands. Standing in front of the lampstands was a man wearing a long robe with a gold sash . His hair was pure white and his eyes were like flames. In his right hand he held seven stars. John was so terrified, he fainted, almost as if he were dead.

The man reached down and touched John. “Do not be afraid,” he said. “I am the first and the last, the one who lives. Once I was dead, but now I am alive forever and ever. I hold the keys to death and the netherworld.”

After John had finished his letters, he saw many more visions. He saw a throne in heaven, on which was seated a man whose appearance sparkled like precious gems. The throne was surrounded by seven burning torches, and lightning and thunder engulfed it.

In the right hand of the man seated on the throne was a scroll that had writing on both sides of it, and it was sealed with seven seals. An angel asked in a very loud voice, “Who is worthy to open the scroll and break its seals?”

No one came forward. John cried for all of humanity because no one was worthy to break the seals.

Then one of the elders of heaven said to John, “Do not weep. The lion of the tribe of Judah, the root of David, has triumphed, enabling him to open the scroll with its seven seals.”

John saw the seals opened, he heard trumpets blast, he saw a dragon chasing a woman who was about to have a baby. The baby was taken up to heaven to protect it. Then Michael the angel battled the dragon. John saw beasts and plagues. He saw terrible things; he saw wonderful things. He heard the angels sing of one called the King of kings and Lord of lords. He saw a new heaven and a new earth.

And he saw Jesus, who said, “I, Jesus, sent my angel to give you this testimony for the churches.”

Q&A
1. Where was John supposed to send his letters?
2. What happened when John saw the man in the robe?

Bible Accent: The Book of Revelation

The Book of Revelation is not easy to understand because it is not a narrative like the Gospels, and it is not a letter of explanation like some of those written by St. Paul. It is filled with images and visions, such as we might see in a dream.

Some biblical scholars believe this book was deliberately written to be a hidden message to the Christians who were being persecuted so they would not give up. John himself was imprisoned on the island of Patmos when he wrote it.

Because of the way the book was written, it has been interpreted in many ways. There have been arguments over the meaning of particular passages. What most scholars agree on is that in the end Jesus triumphs over evil, rescues his people and creates a new heaven and a new earth. The last chapter ends when Jesus announces, “Yes, I am coming soon.”

William of Eskilsoe, who was born in 1125, was a French religious who willingly led a life with few comforts. He spent many hours in prayer and became a scholar of religious law. His reputation as a holy man spread across his country. An account written after his death described him as “famous for his life and miracles.”

One of the challenges given to William was to be part of a movement to restore discipline and order to some of the Danish monasteries. Although he received resistance from some people, he was successful in setting up guidelines and principles for the monks to live by.

He spent some time working outside of Denmark, but he eventually returned. He died there in 1203.

We remember him on April 6.