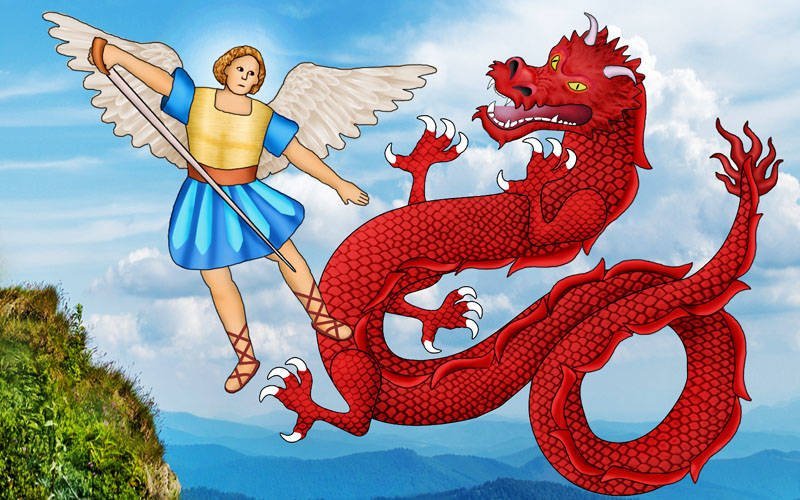 John sees the archangel Michael’s battle with a dragon

John had been exiled to the Greek island of Patmos because he was a Christian.

He was worshipping one Sunday when Jesus appeared to him. After Jesus gave John messages to give to the seven Christian churches in Asia, he was taken up to heaven.

There was thunder and lightning in heaven, as well as four living creatures, 24 elders and many angels surrounding the throne of God. Everyone in heaven worshipped God continually.

John was given many visions. One of them was of a woman who was pregnant. She was “clothed with the sun, with the moon under her feet, and on her head a crown of 12 stars,” John said in describing what he saw.

He said the woman wailed aloud in pain as she labored to give birth.

“It was a huge red dragon, with seven heads and 10 horns, and on its heads were seven diadems. Its tail swept away a third of the stars in the sky and hurled them down to the earth. Then the dragon stood before the woman about to give birth, to devour her child when she gave birth,” John continued.

The woman gave birth to a male child, who was destined to rule all the nations with an iron rod. The baby was caught up to God and his throne, John said.

God had prepared a place in the desert to which the woman fled, and she stayed there and was taken care of for 1,260 days.

“The huge dragon, the ancient serpent, who is called the Devil and Satan, who deceived the whole world, was thrown down to earth, and its angels were thrown down with it,” John said.

Then he heard a loud voice speaking from heaven that told those dwelling there to rejoice.

“But woe to you, earth and sea, for the Devil has come down to you in great fury, for he knows he has but a short time,” the voice warned.

1. What are some of the things John saw in heaven?

2. Who was on each side of the war in heaven?

TRIVIA: Which angel spoke to Zechariah, the father of John the Baptist? (Hint: Luke 1:19)

Michael, Gabriel and Raphael are the three archangels — messengers sent by God — who are mentioned by name in the Bible.

In Daniel 10, Michael is called “one of the chief princes.” In the Letter of Jude, he is described as an archangel who had an argument with the devil in a dispute over Moses’ body. And in the Book of Revelation, he and his angels clash with a dragon and its angels during a battle in heaven.

In the Book of Tobit, Raphael was sent by God to help Tobit’s family by accompanying Tobit’s son, Tobiah, on a journey. At the end of the journey, he revealed his true identity to Tobit and Tobiah: “I am Raphael, one of the seven angels who stand and serve before the glory of the Lord.”

In the Book of Daniel, Gabriel explains the prophet’s vision to him. And in the New Testament, he delivers two very important messages to announce the births of John the Baptist and Jesus.

After the Second Vatican Council, the church created a joint feast day for these archangels on Sept. 29.

The concept of guardian angels has biblical roots.

The angel Raphael helped Tobit and his family. An angel interpreted for the prophet Zechariah. And in the Acts of the Apostles, an angel tells the centurion Cornelius to summon Peter, who baptizes him and his family.

In the Letter to the Hebrews, angels are called “ministering spirits sent to serve.” In Matthew, Jesus said, “See that you do not despise one of these little ones, for I say to you that their angels in heaven always look upon the face of my heavenly Father.”

And according to the Catechism of the Catholic Church, “Beside each believer stands an angel as protector and shepherd.”

In the 1670s, Pope Clement X set Oct. 2 as the feast of the Holy Guardian Angels.

Answers: earth woe but and to sea you

But woe to you, earth and sea.