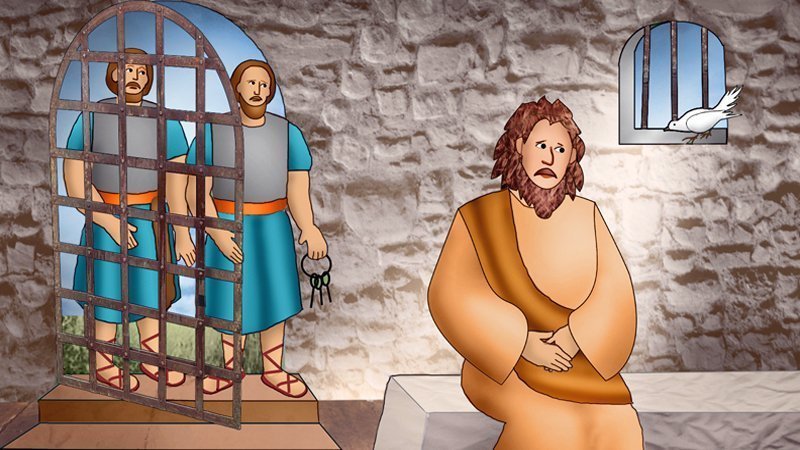 Before Jesus began his public ministry, his cousin, John the Baptist, was living in the desert.

John dressed in clothes made of camel’s hair and ate locust and wild honey. He told the people to repent and be baptized in the Jordan River for the forgiveness of sins, and he also told them about the coming of the Messiah.

John’s actions were prophesied in the Old Testament book of Isaiah: “Behold, I am sending my messenger ahead of you; he will prepare your way. A voice of one crying out in the desert: ‘Prepare the way of the Lord, make straight his paths.’”

“One mightier than I is coming after me,” John told the many people who flocked to him for baptism. “I am not worthy to stoop and loosen the thongs of his sandals. I have baptized you with water; he will baptize you with the Holy Spirit.”

John was not afraid to tell people that they were sinning and needed to repent. For example, John told King Herod that he was being sinful because his marriage to Herodias was considered unlawful.

Herodias did not like being told that she and Herod were being sinful. She held a grudge against John and wanted him dead.

Herod, on the other hand, was afraid of John because he was holy and righteous. He decided to have John arrested and put in jail.

While John was in jail, Herod threw a big party that was attended by many important people. During the party, Herodias’ daughter performed a dance for Herod and his guests. Herod liked the performance so much that he promised to give the girl anything she wanted, even up to half of his kingdom.

The girl went to her mother for advice on what to ask for.

Herodias told her daughter to ask Herod for John’s execution.

When the girl told Herod that she wanted John killed, the king did not want to do it. But he had made his promise in front of so many people that he felt forced to keep his word.

Herod then sent an executioner to the jail to kill John.

When John’s followers heard what had happened, they came to get his body and laid it in a tomb.

1. Where did John baptize people?

2. Who hated John and wanted him dead?

Some say John’s baptism was a version of the Jewish mikvah, which is a ritual bath meant to cleanse the spirit and to represent a new beginning. John wanted people to become clean so they could prepare for the Messiah’s coming.

There are many places in the Bible that describe how people prepared for something important by cleaning themselves.

For example, in the Book of Exodus, Aaron and his sons were washed with water before they were consecrated as priests, and they also washed their hands and feet before approaching the altar.

In the Book of Numbers, the Levites were sprinkled with water to be cleansed before they could start serving God.

In Ezekiel 36, God told the people of Israel that he would cleanse them of their impurities by sprinkling them with water so they could observe and keep his commandments.

And in Revelation 22, those who wash their robes are said to have the right to the tree of life.

St. Teresa of Kolkata — more commonly known as Mother Teresa — was born in 1910 in Macedonia. She joined the Loreto Sisters in Ireland when she was 18, and she was assigned to teach in a Catholic girls’ school in Kolkata, India.

In 1946, she heard a call from Jesus, who told her to serve the poorest of the poor in Kolkata. In order to do this, Mother Teresa founded the Missionaries of Charity in 1950.

Mother Teresa — who was known as the “saint of the gutters” — received the Nobel Peace Prize in 1979 and the U.S. Congressional Gold Medal in 1997, the same year she died.

She was canonized by Pope Francis in 2016, and we remember her on Sept. 5.