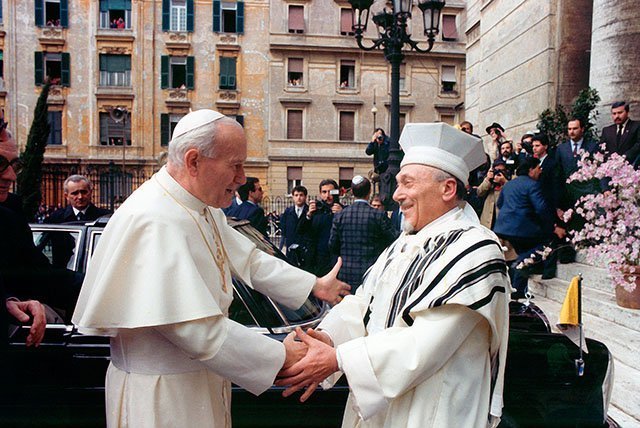 Pope John Paul II greets Rabbi Elio Toaff at Rome’s main synagogue April 13, 1986. The meeting marked the beginning of a new era in Catholic-Jewish relations. It was the first time a pope had entered the Rome synagogue.

VATICAN CITY (CNS) — Blesseds John XXIII and John Paul II left lasting marks on the way the Catholic Church understands other religions and the way it interacts with believers of other faith communities.

Both popes’ outgoing personalities and personal experiences — especially during World War II — obviously came into play, as did the fact that the world around them and many of their own faithful, theologians and bishops increasingly sensed that respecting human dignity meant at least trying to respect that others also were searching for truth.

Pope Francis is scheduled to declare the two popes saints during a Mass April 27 at the Vatican.

Adnane Mokrani, who teaches at Rome’s Pontifical Institute for Arabic and Islamic Studies, said Blessed John “is not well known in the Arab world, except by those who are very involved in dialogue,” although “obviously, it is different in Turkey” where he served as apostolic delegate for 10 years before becoming pope. Still, he is a key player in Catholic-Muslim dialogue because he convoked the Second Vatican Council, which formally set a new tone for the Catholic Church’s view of other religions and other believers.

Rabbi Rosen said he believes there is much truth in the assertion that “John XXIII’s recognition that the church had to reassess its whole relationship with the Jewish people — which was the inspiration for ‘Nostra Aetate’ (the Second Vatican Council document on relations with other religions) — was what led the church to begin to look at its relationship with all other religions.”

The Catholic Church “came to a more universal approach to dialogue out of its ‘rehabilitation,’ if you like, of its relationship with Judaism and the Jewish people,” the rabbi said.

The Nazis’ attempt to exterminate the Jews had a profound impact on both popes and on their relationship with Jews both during and after World War II.

From 1935 to 1945, Blessed John served as apostolic delegate to Turkey, a country that remained neutral during the Second World War. His relationship with King Boris of Bulgaria, where he had served previously, his contacts with top Catholic leaders throughout Europe and with other diplomats based in Turkey gave him repeated opportunities to help Jews fleeing the Nazis receive the papers they needed to escape.

“He not only helped to rescue Jews, but was one of the first people to get information about what was happening,” Rabbi Rosen said.

Even before the liturgical reforms of the Second Vatican Council, in 1959 Blessed John ordered a change in a Good Friday prayer many Catholics and Jews believed contributed to anti-Jewish sentiments among Catholics. The text offered prayers “for the faithless Jews” — in Latin “perfidia iudaica,” which often was translated into English as “perfidious Jews” rather than “faithless.”

Even more importantly, Rabbi Rosen said, was Blessed John’s meeting in 1960 with the French Jewish scholar Jules Isaac, whose wife and daughter had been killed at Auschwitz.

“I don’t know to what degree Roncalli (Blessed John) had internalized the systematic demonization of the Jew within the church — I think very few within the church did — but he knew there was something wrong, he knew something had to change. To have it presented as systematically as Jules Isaac did, I think that was a strong boost for his resolve to address this whole relationship,” Rabbi Rosen said.

Blessed John “is the revolutionary,” the rabbi said, and everything later popes did built on his groundbreaking moves. “I think it’s quite striking: John XXIII starts the process and John Paul II takes it to new heights.”

Blessed John began the process that led to the Second Vatican Council’s recognition that the seeds of truth and even God’s presence could be seen at work in other religions; Blessed John Paul showed the world how seriously the church believes that by inviting representatives of all the world’s major religions — and several local indigenous religions — to Assisi, Italy, in 1986 to pray for peace.

Blessed John Paul has a special place in the hearts of many Jews, and his efforts to promote Catholic-Jewish relations will be remembered as a hallmark of his papacy. He grew up with Jewish friends not far from what would become the Auschwitz death camp; frequently condemned anti-Semitism as a sin; was the first pope, probably since St. Peter, to visit the Rome synagogue; and was the first to pray at the Western Wall in Jerusalem, leaving amid its stones a note asking God’s forgiveness for Catholics’ past hostility to Jews.

“In the Arab world, Pope John Paul II is better known” than Blessed John, Mokrani said. “His speech to young Muslims in Casablanca (Morocco, in 1985) was an extremely strong moment of dialogue that had an echo throughout the Arab world. His visits to Tunisia, Egypt, Syria and the Holy Land were signs of brotherhood and peace.”

“Another important point is that at critical moments — especially during the war in Iraq — he was very adept at maintaining balance,” Mokrani said. “His position against the war and in favor of peace on a spiritual, diplomatic and political level was very clear and helped overcome the tendency some people had to identify the West with Christianity.”

Both popes about to be canonized were living examples that “traveling, meeting people, learning new cultures and interacting with others every day creates bonds,” Mokrani said. “Personal, direct contacts are essential, fundamental for dialogue. Dialogue isn’t something you can learn at university, you have to live it.”

Tags: Interfaith Relations
Copyright © 2023 Catholic News Service, Inc. All rights reserved. Linking is encouraged, but republishing or redistributing, including by framing or similar means, without the publisher's prior written permission is prohibited.