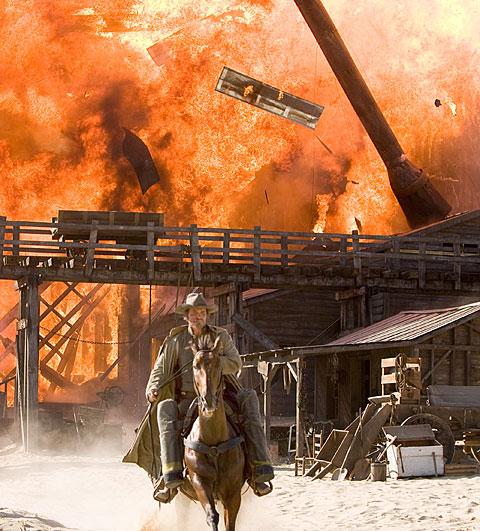 NEW YORK (CNS) — "Jonah Hex" (Warner Bros.), based on the popular DC Comics series, tries very hard to be a rip-roaring Western but keeps falling between two stools. The title character is both hero and villain, a crusader for justice but also a man hellbent on revenge.

The period atmosphere is gritty and authentic, but what about all those people rising from the dead, not to mention the alien technology in the firearms?.

In short, put reality on hold and watch a comic book come alive in this fast-paced, tongue-in-cheek adventure. At just 81 minutes, this film is a pretty fast read.

We first meet Jonah Hex (Josh Brolin) tied to a St. Andrew cross, which is X-shaped, and forced to watch as his archnemesis Quentin Turnbull (John Malkovich) murders his wife and son. Turnbull then brands his own initials on Hex’s face, and leaves him for dead. Hex’s hideous scar becomes a metaphor for his pain and an all-consuming thirst for revenge.

Hex is rescued by local shamans and brought back to life — sort of — with a nifty new skill: When he touches a corpse, it resurrects, allowing Hex time for interrogation and discovery..

This talent comes in handy, as the body count in "Jonah Hex" is enormous: Scores die, by gunshot, ax, fire, dynamite, even rabid dogs. No wonder there always seems to be a lot of empty wood coffins lying around, and schools of ravens circling overhead.

Turnbull, a former Confederate general who never accepted the Union victory in the Civil War, fakes his death. Hex, who served in Turnbull’s regiment, channels his unrequited revenge into a new life as a High Plains drifter and bounty hunter.

Only one good woman holds his heart: prostitute Lilah (Megan Fox), who has issues of her own. We never learn what these are, and the corseted Fox is simply Western eye candy (and a far cry from Miss Kitty in "Gunsmoke").

Soon we discover Turnbull is alive, and amassing armies and firepower to restart the Civil War. President Ulysses S. Grant (Aidan Quinn), the fearless Union general, looks mighty afraid in this movie for, as he intones, "Turnbull is building the weapon.".

In true comic-book fashion, "Jonah Hex" careens off the rails into fantasy. It seems Eli Whitney, once he invented the cotton gin and new kinds of firearms, drew up plans for the first weapon of mass destruction..

Turnbull obtains these plans, and builds what he calls "a country killer," intent on obliterating Washington on the Fourth of July, 1876. Only one man can stop him: Jonah Hex.

Few are spared a violent end in "Jonah Hex," and director Jimmy Hayward ("Horton Hears a Who!") displays a sadistic fondness for mass murder, including blowing up innocent churchgoers as they leave Sunday service. The destruction is, however, remarkably unbloody, and the camera does not linger long on the victims.

While it is always clear that the bad guys go to hell (when the "hell hounds" can be heard barking, you’re in a bad spot), it’s hard to condone Hex’s fanatical drive for revenge, whatever happened to him in the past.

"Jonah Hex" contains stylized if unbloody violence, including gunfights, brawls, and explosions, implied sexual activity, occult rituals, and some profanity. The Catholic News Service classification is A-III – adults. The Motion Picture Association of America rating is PG-13 — parents strongly cautioned. Some material may be inappropriate for children under 13.