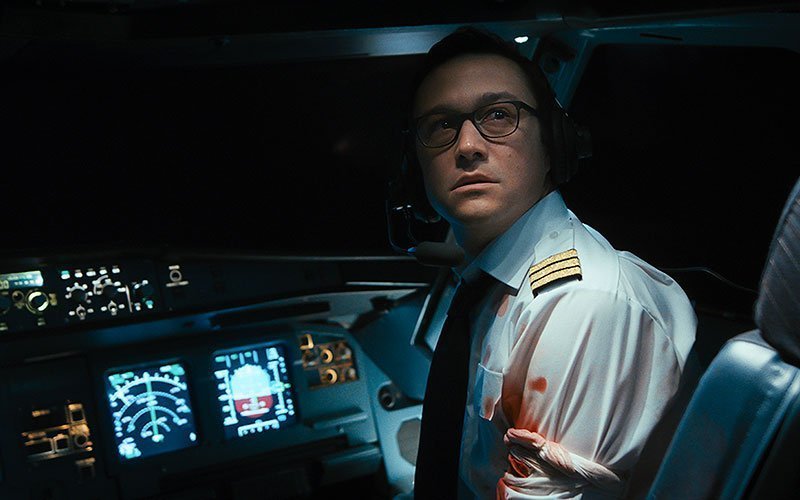 Joseph Gordon-Levitt stars in a scene from the movie "7500." (CNS by Amazon Studios via EPK-TV)

NEW YORK (CNS) — Viewers’ reaction to the hijacking thriller “7500” (Amazon) might depend on how far the memory of 9/11 has receded for them.

Peril in the skies has always been a dramatic staple. But Islamist terrorists who chant “Allahu akbar” are such predictable villains that the plot gets drained of suspense after a while.

Director Patrick Vollrath, who co-wrote the screenplay with Senad Halilbasic, has come up with the original notion of telling the story exclusively from the viewpoint of co-pilot Tobias (Joseph Gordon-Levitt). Confined within the cramped cockpit at nighttime, its small space dimly illuminated by the glowing instrument panel, he has only occasional glimpses of cabin violence via a small black-and-white monitor.

The plot thus becomes a moral maze for Tobias, who must weigh his professionalism and training against the need to preserve lives of the crew and passengers. Ground control can only get him so far and, with a wounded arm, he needs to find someone who can help operate the instruments.

Before the flight from Berlin to Paris begins, the only crisis appears to be that two passengers checked in baggage without boarding, and Tobias chats amiably with his flight-attendant girlfriend, Gokce (Aylin Tezel), with whom he has a 2-year-old son.

Armed with glass shards, hijackers led by Kenan (Murathan Muslu) storm the cockpit as soon as the jetliner reaches cruising altitude. Tobias manages to kill one of the assailants before Michael (Carlo Kitzlinger), the captain, is mortally wounded.

Tobias gets the cockpit door sealed off, but then has to deal with threats to the passengers as well as to Gokce. He also has to make a decision about landing the plane while simultaneously attempting to calm down the youngest hijacker, 18-year-old Vedat (Omid Memar).

None of this quite adds up to white-knuckle suspense. But the drama is effective in showing how one man’s series of decisions can affect the lives of others.