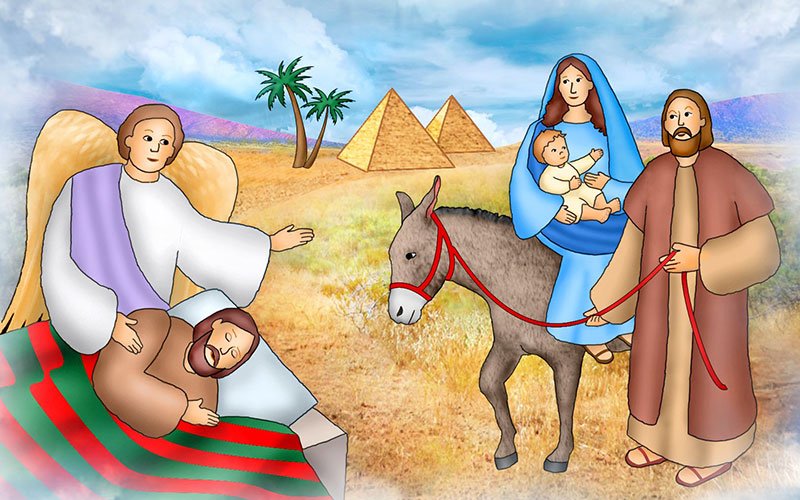 This is the artwork for Kids' Chronicle for Dec. 28, 2021. (CNS illustration b Linda Rivers)

After the baby Jesus was born in Bethlehem, Magi from the east arrived in Jerusalem.

“Where is the newborn king of the Jews? We saw his star at its rising and have come to do him homage,” they said as they searched for Jesus.

When King Herod heard about the Magi’s search, he became concerned. He asked the chief priests and the scribes where the Messiah was to be born.

“In Bethlehem of Judea,” they said, “for thus it has been written through the prophet: ‘And you, Bethlehem, land of Judah, are by no means least among the rulers of Judah; since from you shall come a ruler, who is to shepherd my people Israel.'”

Herod secretly called the Magi to him and found out the date they had first seen the star appear. He also told them they could find the Messiah in Bethlehem.

“Go and search diligently for the child. When you have found him, bring me word, that I too may go and do him homage,” the king said.

The Magi again set out on their journey. They followed the star to where it stopped, which was over the house in Bethlehem where Mary, Joseph and Jesus were staying.

The Magi were overjoyed at seeing the star. When they entered the house, they saw Jesus with Mary. They prostrated themselves and did Jesus homage, and then they offered him gifts of gold, frankincense and myrrh.

When the Magi left Jesus, Mary and Joseph, they returned home by another route, because they were warned in a dream not to return to King Herod.

After the Magi left, an angel of the Lord came to Joseph in a dream.

“Rise, take the child and his mother, flee to Egypt and stay there until I tell you. Herod is going to search for the child to destroy him,” the angel warned.

Joseph rose and took the child and his mother by night and departed for Egypt. He stayed there until the death of Herod, so what God had said through the prophets might be fulfilled, “Out of Egypt I called my son.”

TRIVIA: In which region of Israel is Bethlehem located? (Hint: Matthew 2:1)

What happened after Joseph, Mary and Jesus fled to Egypt?

In Matthew 2:16, we read that King Herod was furious when he realized that the Magi had left for their home country without coming back to Jerusalem to tell him where he could find the Messiah.

Just as the Magi had been warned, Herod wanted to find the Messiah to destroy him, not to do him homage.

Herod had a backup plan. The Magi had unwittingly told him exactly when they first saw the star that was leading them to the Messiah. That helped Herod determine that ordering the deaths of all boys 2 years old and younger who lived in and around Bethlehem would likely kill the Messiah along with them.

When Herod ordered the deaths of those innocent children, it fulfilled a prophecy said through the prophet Jeremiah: “A voice was heard in Ramah, sobbing and loud lamentation; Rachel weeping for her children, and she would not be consoled, since they were no more.”

St. Marguerite Bourgeoys was born in France in 1620. As she grew up, she formed a special relationship with Our Lady.

She wanted to enter a religious community, but she was turned away from two of them. She then met the founder of Montreal, Canada, when he visited his sister in France. He invited Marguerite to come to the New World to open a school. After praying to Mary, she decided to go.

Her school started out in an abandoned stable and grew to include teaching women crafts and the founding of the Sisters of the Congregation of Notre Dame.

Marguerite died in 1700, and she became Canada’s first female saint when she was canonized in 1982. We remember her on Jan. 12.

Using the hints provided, answer the questions about the Holy Family.