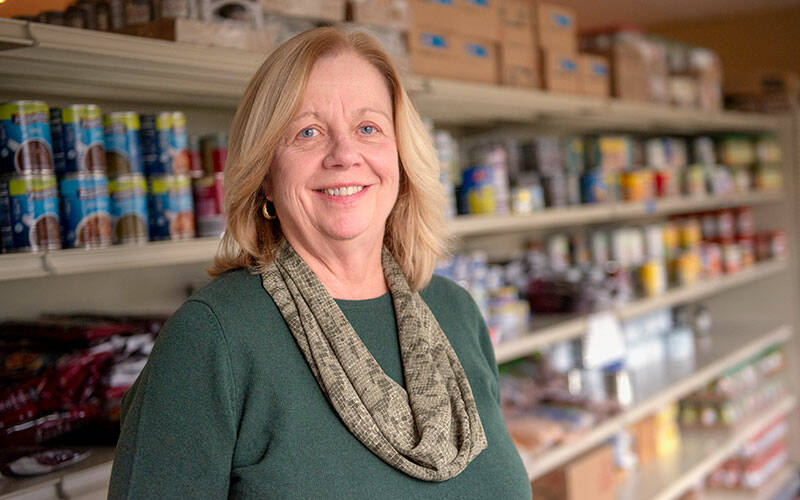 ROCHESTER — Pat Scarbinsky doesn’t judge the people who seek out Joseph’s Place, noting that their poverty doesn’t make them any less human.

“People who come in here have hearts of gold. They’re so appreciative, so respectful,” said Scarbinsky, who serves as the ministry’s director.

Joseph’s Place, located at 287 Flower City Park, has provided food support to residents of northwest Rochester since its founding in 2015. An initiative of the Cathedral Community, it’s housed in the former convent across the street from Sacred Heart Cathedral. The ministry recently received a $1,600 Hunger Relief grant, funded in part by last year’s Catholic Courier/Catholic Charities Christmas Appeal.

Joseph’s Place was founded to supplement efforts of the nearby Maplewood Edgerton Emergency Kupboard (MEEK), which is another Hunger Relief Grant recipient. Scarbinsky explained that Joseph’s Place offers each guest a monthly food allocation, whereas MEEK operates on an every-other-month basis.

Food is distributed at Joseph’s Place on the second, third and fourth Wednesday of each month. Due to the coronavirus pandemic, distribution is currently by appointment only to limit the number of people inside the facility at any one time. Food allotments are based on family size, although Scarbinsky said guests often receive more than a fixed amount if the pantry happens to be well stocked.

The coverage area for Joseph’s Place is bordered by the Genesee River to the east, Mount Read Boulevard to the west, the 14615 ZIP code to the north and Lyell Avenue to the south. Scarbinsky said the area is marked by a high concentration of poverty and few full-scale grocery stores.

“This neighborhood is a food desert,” she observed.

Scarbinsky said many guests don’t own vehicles and either car-pool to Joseph’s Place or arrive on foot hauling various wheeled carriers to bring home their food. “Some of them are walking quite a distance,” she noted.

Most of the inventory at Joseph’s Place is provided by Foodlink, a Rochester-based food bank that gets much of its food through the Feeding America hunger-relief national network. Joseph’s Place also is supported by grants, fundraising events and individual donations. Its pantry holds an array of canned and boxed food items, along with refrigerated and frozen goods.

Scarbinsky said Joseph’s Place also strives to provide such fresh foods as potatoes, onions, cheese, bread and apples in an effort to encourage healthy eating. Snacks are offered as well: “People who are dealing with food deprivation, just to get a little bag of cookies is so meaningful to them,” she remarked.

In addition to food, Joseph’s Place provides hygiene and toiletry products. The ministry also offers clothing giveaways when new items become available, as well as referrals to other food ministries and other community-support services.

Scarbinsky has been involved with Joseph’s Place since its first year. The ministry was founded by Father Kevin McKenna, the former rector of Sacred Heart Cathedral to whom the ministry’s hospitality room is dedicated; Marcus Ebenhoe, Catholic Family Center’s director of advocacy and parish social ministry; and Bob DiFulio, a Cathedral Community parishioner.

A big draw for Scarbinsky’s involvement, she said, is the abundant camaraderie between Joseph’s Place staff, volunteers and the people they serve. She noted, for instance, that she’s looking forward to again serving snacks and drinks to guests in the hospitality room once the pandemic has substantially subsided.

“I love the volunteers, I love our guests. I enjoy seeing everybody, being able to help,” she said. “I get more back than what I give.”