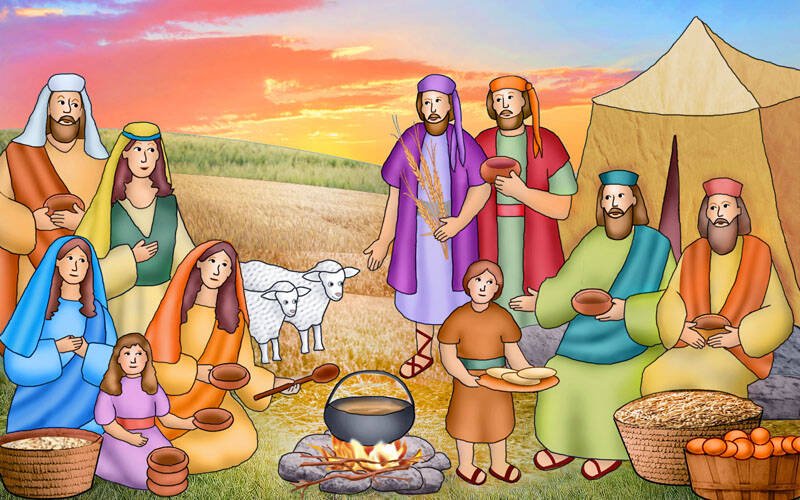 Peter recognizes that Jesus is the Messiah

The Israelites enter the Promised Land

After Moses died, God chose Joshua, son of Nun, to lead the Israelites into the Promised Land.

Joshua readied the people to cross the Jordan River and into the land that was to be their new home. He told the people to follow the priests who would be carrying the ark of the covenant.

He said that when the soles of the priests’ feet touched the water of the Jordan, God would make the river stop flowing so the people could cross.

Once the people crossed the dry riverbed, God told Joshua to have one person from each of the 12 tribes of Israel take a large stone from the riverbed and bring it to the place where they would make camp.

“In the future, these are to be a sign among you,” Joshua said. “When your children ask you, ‘What do these stones mean to you?’ you shall answer them, ‘The waters of the Jordan ceased to flow before the ark of the covenant of the Lord when it crossed the Jordan.’ Thus these stones are to serve as a perpetual memorial to the Israelites.”

Joshua then told the priests to come out of the riverbed, and the Jordan began flowing again.

The people camped in Gilgal on the eastern limits of Jericho, and Joshua set up the 12 memorial stones there.

Also at Gilgal, all the men who had been born during the 40 years that the Israelites wandered in the desert after leaving Egypt were circumcised.

“Today I have removed the reproach of Egypt from you,” God told Joshua.

The Israelites celebrated the Passover while they were camped at Gilgal on the plains of Jericho and ate of the produce of the land in the form of unleavened cakes and parched grain.

On that same day after they ate of the produce of the land, the manna God provided for them in the desert ceased.

After celebrating the Passover, Joshua was near the city of Jericho. He looked up and saw someone with a drawn sword in hand. He was the commander of the army of God.

God then explained to Joshua how to defeat the people of Jericho.

1. Who led the people after Moses’ death?

2. Where did the Israelites camp in the Promised Land?

TRIVIA: What happened to Jericho when a horn blew and the Israelites shouted? (Hint: Joshua 6:20)

Before helping the Israelites cross the Jordan River, God helped them cross another body of water.

In Exodus 14, we read that after God freed the Israelites from slavery in Egypt, he told Moses to have the people camp near the Red Sea.

God hardened Pharaoh’s heart so that he would send his army to pursue the Israelites and enslave them again.

When the Israelites saw Pharaoh’s army approaching, they were frightened. They cried out to God.

“Do not fear!” Moses said. “Stand your ground and see the victory the Lord will win for you today. For these Egyptians whom you see today you will never see again. The Lord will fight for you; you have only to keep still.”

“Lift up your staff and stretch out your hand over the sea, and split it in two, that the Israelites may pass through the sea on dry land,” God told Moses.

When it was dark, Moses did as God said.

God drove back the sea with a strong wind and turned the sea into dry ground. The waters were split, so when the Israelites crossed the dry ground, there was a wall of water to their right and left.

St. Magdalen Canossa was born into a noble family in Verona, Italy, in 1774. Her father died when she was 5, and her mother abandoned her after remarrying.

Magdalen chose religious life over an advantageous marriage. She joined the Carmelites, but she left after learning the order’s strict rules of enclosure would prohibit her charitable works.

She began the Canossian Daughters of Charity in 1799 by bringing two poor girls into her home. The institute spread throughout Italy, and she helped found an order of priests and a third order for laypeople.

Using the hints provided, fill in the blanks in the sentences about the Israelites in Jericho.