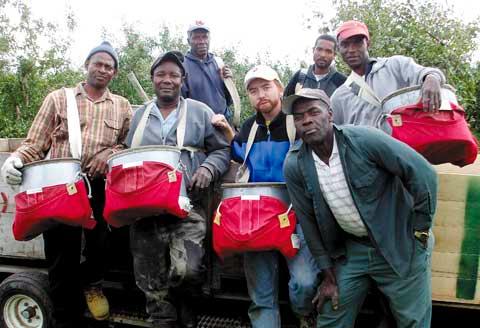 BROCKPORT — Tom Rivers didn’t set out to offer a treatise on immigration reform two years ago when he began a project to undertake and write about the grueling nature of farm labor.

But in detailing the back-breaking physical demands and exhaustion migrant workers face every day in order to support their families, Rivers said he came to hope that those who read his stories would get a different perspective on the immigration debate. Farm work, he said, is harder than running a marathon.

Rivers spoke during the 10th-annual Diversity Conference hosted by the State University of New York at Brockport on Sept. 16. About 50 people attended the workshop in which he discussed his 16-part series of articles for Batavia’s The Daily News. The series evolved into the book Farm Hands: Hard Work and Hard Lessons from Western New York Fields, which was published this year. The articles — which focused on his journey from milking cows to picking 20-pound heads of cabbage — also were recognized by the North American Agricultural Journalists association, Columbia Journalism School and the Associated Press.

Rivers noted that his journalistic investigation of this "unknown" population didn’t take him very far from his home in Albion.

"You think you have to go to Bosnia or Russia," he said. "I only had to go one mile from my home."

Rivers said he covered the plight of farmers even before comprehensive immigration legislation became a national debate, and farmers told him that a shortage of laborers would result from increased border enforcement following the terrorist attacks of 9-11 combined with a failure to adopt immigration-reform legislation.

In 2008, as some speakers in the national debate began using rhetoric about migrant workers stealing jobs and taking advantage of social services, Rivers noted that no attention ever was paid to the difficulties of the actual work of farming. That is when he decided to shed some light on the matter.

"I just thought it would be cool to throw it in people’s faces," he remarked.

Writing the series would also prove educational for Rivers. Even though he had long been an agriculture reporter, Rivers noted that he hadn’t gone out to farms very often. So he set out to write a series of first-person stories about the farming season from March to October.

"Even if you get away from the immigration issue, I just thought it’d be great to show how food is grown," he added.

His editors let him give it a try, but did not send a photographer in the beginning. So in his initial days in the fields, he took his own pictures using a small digital camera and ended up having a migrant worker take a photo of him that ultimately became the cover of his book.

Rivers reached out to farmers in the area and ended up working for a day each at about 13 farms, many of which employ workers on H-2A visas, which allow foreign workers to travel to a specific area for labor that must be "of a temporary (or seasonal) nature" and last less than a year, according to information on the U.S. Department of Labor website. Employers also must prove that their need for workers is truly temporary, Rivers noted, explaining how one farmer switched to H-2A workers after losing 100 undocumented workers to immigration raids in 2006.

His only stint lasting several days was one milking cows at a dairy farm, Rivers said. Some of the most surprisingly difficult days were spent picking cherries, which required him to climb trees about 25 feet high, and blueberries in 88-degree heat while struggling to determine which fruit was ripe. Rivers explained that selecting perfect fruit is important, as thousands of dollars can be lost if supermarket chains reject shipments that fail to meet their 99-percent blemish-free requirements.

"The suburban housewife is the enemy of the farmer … (by) setting ridiculously high standards," he commented.

Rivers also helped pick 40 tons of cabbage in a downpour — bending down to pick 20-pound heads of cabbage and then flinging them on a truck.

"No weather is too bad to get cabbage," he said. "It was thundering and lightening. And we’re out with metal knives and stuff. … I was stunned how bad it was."

Rivers said it took four days for the tendons in his wrist to recover enough for him to pick up his young daughter. He told the Brockport audience that he lost 40 pounds working the fields and later trained for and ran a marathon, which did not match the difficulty of laboring in the fields. Many of the migrant workers — who came from Mexico, Jamaica, Haiti and other nations — did not trust him at first or believe he would make it through the day because they had seen other Americans quit before the first day was done.

But the workers showed acts of kindness that touched him — such as giving him tips in the fields when he found himself at a breaking point, or offering the first sip from a soda purchased by a worker. He heard over and over that these workers take such risks to do the work because their families rely totally on them for survival.

"I met some inspiring folks in the fields. No surprise there," he wrote in the book. "Some of the workers confided to me they were illegal, lacking the documents to be in the country. They didn’t want to be pictured or have their names, even their made-up ones, in the newspaper. They didn’t want to risk being sent home by drawing attention to themselves. They needed the money they were earning, typically $10 an hour. Many put in 60 hours or more a week, with no complaints."

EDITOR’S NOTE: For more information about Tom Rivers or his book, visit www.farmhandsbook.com.