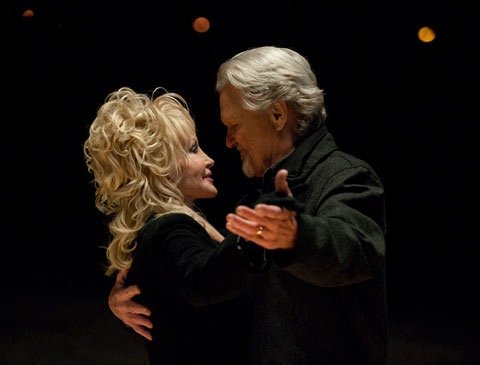 NEW YORK (CNS) — Divas duel and a red-state Romeo and Juliet fall for each other in "Joyful Noise" (Warner Bros.).

Though it gives a pass to an incidental out-of-wedlock fling, and showcases some humor and vocabulary that make it unsuitable for youngsters, writer-director Todd Graff’s otherwise uplifting celebration of traditional values emphasizes trust in God and illustrates the positive effects of compassionate and forgiving behavior.

Just as their ensemble is preparing to compete in the higher rounds of the singing competition from which the film takes its title, G.G.’s husband, Bernie (Kris Kristofferson), the chorus’ long-standing director, suddenly dies. In his place, the pastor (Courtney B. Vance) appoints, not G.G. herself, but her nemesis, Vi Rose.

While the two jostle over whether to alter the group’s repertoire and performing style — despite her enduring love for her late spouse, it’s G.G. who urges innovation — G.G.’s free-spirited, mildly prodigal grandson Randy (Jeremy Jordan) returns to town. There he’s promptly wowed by another of the chorale’s stars, Vi Rose’s strictly reared daughter, Olivia (Keke Palmer).

Despite his reputation as a wayward kid, and his taste for such dubious musical selections as a rap tune called "I’m ‘n Luv (Wit a Stripper)," Randy proves himself, in most respects, a model teen.

Not only does his relationship with Olivia unfold in a respectful and restrained manner, but he also takes the opportunity to befriend Olivia’s vulnerable brother, Walter (Dexter Darden), whose Asperger’s syndrome renders him an outcast. Additionally, though Randy has a fistfight with a competitor for Olivia’s affections, he later reconciles with the lad in an exemplary manner.

(With a kind of Andy Hardy, let’s-put-on-a-show inevitability, all three of the aforementioned characters turn out to have musical gifts that are eventually deployed for the greater glory of God and the exultation of Pacashau’s Divinity Church Choir.)

Though burdened with a difficult lifestyle — she’s effectively separated, against her will, from her absent Army officer husband, Marcus (Jesse L. Martin), and works long hours as a nurse — Vi Rose’s faith never falters. She gives eloquent expression to it both in no-nonsense dialogue and in song; her rendition of the traditional spiritual "Fix Me, Jesus" is one of the movie’s emotional highlights.

Catholic viewers may be a bit put off to find Vi Rose, G.G. et al. eventually competing against a choir from "Our Lady of Perpetual Tears." Whether this conflation of two genuine Marian titles — Our Lady of Perpetual Help and the lesser-known Our Lady of Tears — is intended as a passing satire on Catholic devotions, or merely arises from unfamiliarity with them, is difficult to determine.

In terms of the broad patrimony of Christian faith and Gospel values, however, "Joyful Noise" is unapologetically, unabashedly affirmative to a degree rarely seen in contemporary Hollywood offerings.

The film contains a premarital situation, occasional sexual references and jokes, about a half-dozen crude expressions and some crass language. The Catholic News Service classification is A-III — adults. The Motion Picture Association of America rating is PG-13 — parents strongly cautioned. Some material may be inappropriate for children under 13.