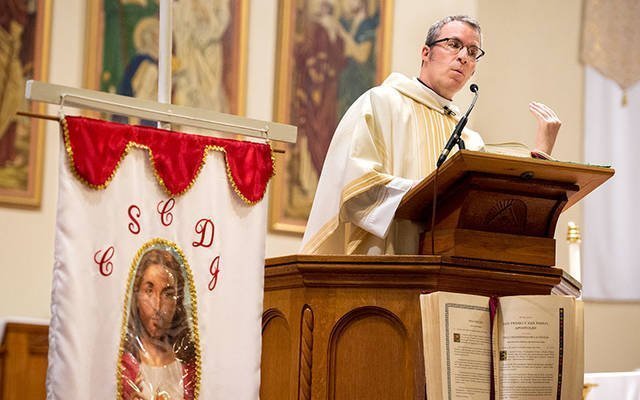 What do a trip to the confessional, a ring and a loaf of bread have in common?

For Fathers William “Mickey“ McGrath, William Graf and Michael Twardzik, they represent profound influences in shaping their vocational lives — lives that, as of 2020, add up to a combined total of 130 years of priestly service.

Two of those 13 decades have been logged by Father McGrath. He recalled that in the late 1980s, after having been largely absent from church involvement during college, he had a spiritual awakening that he described as “feeling the presence of God within me, the touch of God on my soul, the finger of God — I felt unconditionally loved.” From there he began having steadily increasing thoughts of becoming a priest, eventually seeking out Father Timothy Horan — now the pastor at Webster’s Holy Trinity Parish — to receive the sacrament of reconciliation for the first time in many years.

“(Father Horan) gave me absolution, and then I said, ‘I’d like to talk to you about priesthood.’ He said, ‘Sure, I’d be happy to talk to you about that.’ I was always touched by that, because he didn’t reject me,” recalled Father McGrath, who went on to be ordained a priest of the Rochester Diocese in 2000. “(The experience) hit a place in me where there was some need for an affirmation, some reassurance. I had just dumped all this stuff on him, and he didn’t think anything of it. That’s the mercy of God right there, to wipe everything out and start all over.”

Father Graf, on the other hand, was already well into his priesthood when in 1978 he experienced a vocational turning point of his own. He had agreed to a coveted teaching position at the University of Notre Dame, but shortly before he was to relocate to Indiana, diocesan officials implored him to become pastor of a city church in Rochester where they said he was needed. To settle his conflicted feelings, Father Graf fished out a souvenir ring from a cigar box that he had bought years earlier and proceeded to slip in on; it remains on his finger to this day.

“The ring reminded me of marriage. Just like a good husband or good father, I decided I would be committed to the people. I’ve stuck with that feeling over the years with all my assignments,” explained Father Graf, who went on to log three local pastorates and is observing 60 years as a priest this year. He also has made a considerable mark in college teaching through a nearly 40-year involvement at St. John Fisher College, where he still serves full time.

As for Father Twardzik, he noted that while growing up in the 1950s in Pittsfield, Mass., he was intrigued by an image of a monk on a wrapper for Monks’ Bread. Following his priestly ordination in 1970, Father Twardzik periodically visited Abbey of the Genesee in Livingston County, where the Trappist monks manufacture their famous bread. After staying at the abbey during a 2005 sabbatical, Father Twardzik — who is a priest of the Diocese of Springfield — petitioned to remain in the Diocese of Rochester. He ended up serving as parochial vicar for the next 14 years at Holy Family Catholic Community in northern Steuben and southern Livingston counties. Earlier this year, Father Twardzik moved to Geneseo upon reaching senior-priest status, now residing “an eight-minute drive” from Abbey of the Genesee, he said.

Father Twardzik, who is celebrating his 50th year of ordination in 2020, believes that eyeing that initial loaf of bread is distinctly tied in with where he’s ended up many years later.

“As (St.) John Paul (II) would say, there are no accidents in life,” remarked Father Twardzik, referring to the pope’s 1982 quote, “In the designs of Providence there are no mere coincidences.”

Father Twardzik added that several childhood influences also played a role in forming his vocational path. For instance, he recalled that his pastor in Pittsfield “always used to encourage me to become a priest,” and his grandfather would pray for a similar outcome.

Father McGrath, as well, connects some of his early-life church experiences with his eventual priestly vocation.

“I have good memories of serving at the altar. I remember just feeling kind of important,” Father McGrath said, adding that he also has fond memories from his earlier years of First Friday devotions, the smell of incense and singing in Latin — which, he said, “felt like it was very transcendental and otherworldly.”

Father Graf, meanwhile, attributes some of his vocational call to storytelling time while attending Brockport’s Nativity of the Blessed Virgin Mary School.

“I remember that if we behaved all week, on Friday afternoons, we’d have a little party and have candy. Our teachers would read us stories of famous men and women, and that really inspired me,” he said. “I remember hearing the stories of St. Isaac Jogues, St. John Bosco, Abraham Lincoln. And I thought, ‘Gee I’d like to do the kinds of things they did.’ Even to this day, I read biographies and autobiographies of great people.”