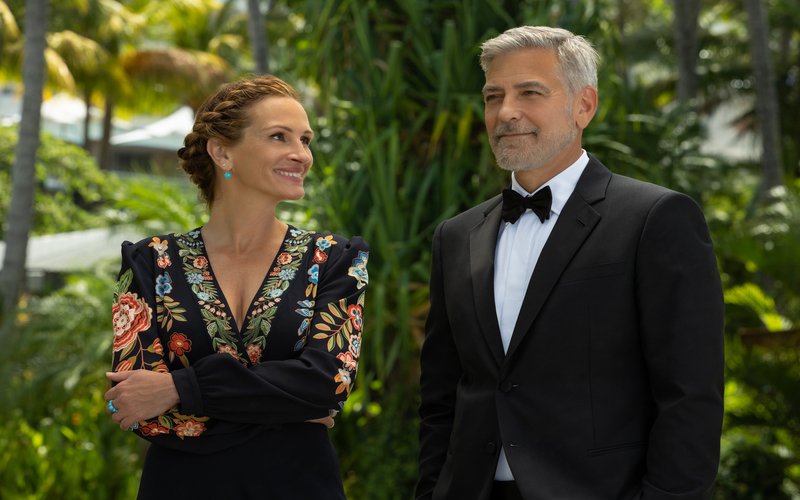 NEW YORK – While the mostly agreeable comedy “Ticket to Paradise” (Universal) won’t necessarily transport viewers to cinematic heaven, it will take them to a good place, both visually and thematically. Set in Indonesia (though filmed in Australia), the film showcases enchanting island landscapes as well as ethical ideas generally in keeping with Gospel-based morality.

Decades after their acrimonious divorce, ex-spouses David and Georgia (George Clooney and Julia Roberts) can agree on only one subject: their enthusiastic love for their daughter, Lily (Kaitlyn Dever). Thus, when they’re temporarily thrown together for Lily’s graduation from law school, the former couple’s longstanding antagonism breaks out afresh amid petty squabbling and mutual putdowns.

Embarking on a well-earned vacation to Bali with her best friend Wren (Billie Lourd) in tow, Lily promptly falls for local seaweed farmer Gede (Maxime Bouttier). When mom and dad learn that Lily has abandoned her plans to become a lawyer and intends instead to marry Gede and settle down in his homeland, they’re horrified at what they regard as her excessively hasty change of direction.

Uniting forces, the duo travels to the South Seas resolved to prevent the forthcoming nuptials.

Behind the often-witty jibes of the script director Ol Parker co-wrote with Daniel Pipski, viewers of faith will discern congenial values. Although undergirded by romanticism rather than religion, the screenplay upholds lasting marital commitment – and ultimately depicts the reasons for David and Georgia’s split as insufficient to justify their alienation from each other.

Some may question the movie’s exultation of traditional native culture over that of the West and may chafe at the facile nature of its message, delivered in passing, about the importance of living in harmony with nature. But few will be inclined to quibble with its celebration of the close ties by which Gede’s extended family are shown to be bound to one another.

As Lily struggles to assert her right to make her own decisions, and David and Georgia reconsider the choices they’ve made in the past, lapses of behavior as well as a few off-color sight gags are included in the proceedings. Though confined to the edges of the story, these incidental elements make “Ticket to Paradise” an expedition that’s safest for grown-ups.

Look for: An implicit endorsement of the permanence of marriage. Look out for: A premarital situation, some sexual humor, a single use of profanity, numerous milder oaths, at least one rough term and several crude and crass expressions.