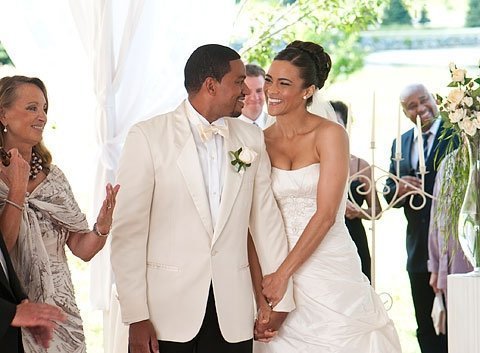 NEW YORK (CNS) — Expertly performed faith-tinged family comedies such as "Jumping the Broom" (TriStar) are such a rare and welcome treat, is it even fair to quibble?

We must. The family secret at the heart of the plot is so emotionally painful and morally and legally complex, it would stop people in their tracks in real life, after which they would probably seek out the likes of Dr. Phil.

There is a clergyman on hand — the Rev. James, played by Bishop T.D. Jakes, senior pastor of the Potter’s Field megachurch in Dallas, and also a producer of this film. But director Salim Akil and screenwriters Elizabeth Hunter and Arlene Gibbs use him mostly as window dressing; he offers some wisdom about soul mates early on, and delivers a sermonette at the end.

But, in between, the characters are left to sort out their serious conflicts without his counsel.

It’s a false note in an otherwise engaging story about the lead-up to a Martha’s Vineyard wedding. The nuptials will unite stockbroker Jason Taylor (Laz Alonso), the son of overprotective Brooklyn postal worker Pam (Loretta Devine), who struggles with anger issues, and lawyer Sabrina Watson (Paula Patton), the daughter of wealthy Claudine and Greg (Angela Bassett and Brian Stokes Mitchell), who are edging toward a divorce.

There are unexpected twists mixed in with the helpings of sweet potato pie and the time-honored formula of upscale vs. downscale. Sabrina and Jason have known each other only six months, and because of a promise she made to God about leading a chaste life, they’re not having premarital sex.

Pam’s devoted Bible reading, though sincerely pursued, is shown to be less than effective in keeping her on the side of righteousness. And, of course, the Watsons’ money and accoutrements prove useless in shielding them from devastating family issues.

Problems are resolved in a series of quick conversations, since the bickering and divergences between the two families (both mothers are masters of the comic slow burn) are mere speed bumps on the way to … well, it is a comedy.