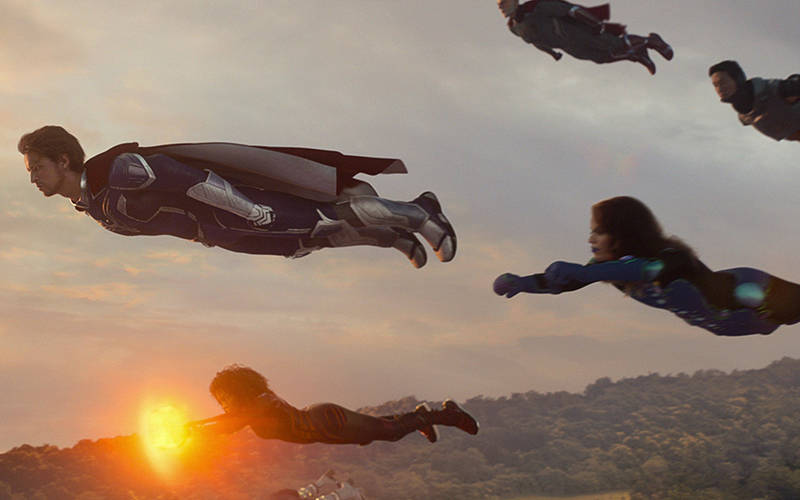 This is a scene from the TV show “Jupiter’s Legacy” streaming on Netflix. (CNS photo by Netflix)

NEW YORK (CNS) — Seventeen years ago, Disney/Pixar’s “The Incredibles” offered a comedic look at what happens to superheroes when they grow up and start a family. “Superman and Lois,” currently on The CW, is a serious drama about the now-married couple as they raise teenage boys.

Based on graphic novels by Mark Millar and Frank Quitely, who also served as executive producers, it’s a sprawling multigenerational epic spanning past and present. Given the degree of violence and gore, together with such other elements as drug use, brief nudity, nongraphic sexual activity, profanity and crude language, however, this is not a program for youngsters.

Adults, on the other hand, may need a guidebook to follow the dizzying array of characters and story lines. The sense of deja vu is overwhelming since “Jupiter’s Legacy” borrows heavily from just about every superhero myth, with players possessing familiar abilities and facing the usual apocalyptic threats.

At the heart of this sprawling pastiche is the Sampson family: parents Grace (Leslie Bibb) and Sheldon (Josh Duhamel) and 20-something kids, Brandon (Andrew Horton) and Chloe (Elena Kampouris). They live on an idyllic farm not unlike Clark Kent’s spread in Smallville.

All possess similar powers to the Man of Steel, including the ability to fly, and three have code-names: Sheldon is “The Utopian,” Grace “Lady Liberty” and Brandon “The Paragon.”

Interestingly, these are Christian superheroes. Sheldon insists that the family say grace before dinner, their thanks to God for his many blessings being offered “through Christ, your Son.”

Additionally, Sheldon and Grace try, often in vain, to impart the values of the “Union of Justice” to which they belong. The Union’s code stresses service, compassion and mercy when fighting evil.

“We don’t kill. We don’t lead. We inspire,” Sheldon observes.

As the title implies, there’s a transition in progress. Brandon seeks to follow in his father’s footsteps as the future leader of the Union, but the burden of responsibility is a heavy one.

Chloe, on the other hand, has rejected her birthright and charts a self-destructive path, cashing in on her celebrity as a model and product endorser (when not snorting cocaine and sleeping around).

A prolonged backstory reveals how the Union was founded roughly 90 years ago, during the 1929 stock market crash (for no apparent reason), and how ordinary people obtained their powers. Instead of the “Fantastic Four” there are six founding members.

Times change, and the Union is presently facing multiple threats. Skyfox has broken away and is now a supervillain allied with a hulking menace named Blackstar (Tyler Mane). Blackstar’s out to kill the younger generation of superheroes — causing the latter to question the old guard’s prohibitions against murder and interference in governmental affairs.

“Jupiter’s Legacy” is escapist fluff, and flashes of humor reveal that its creators aren’t taking themselves too seriously.

Thus, a rare moment of marital intimacy between Sheldon and Grace is interrupted when Sheldon hears an alert about a “rogue” comet hurtling toward Earth. As he suits up and heads out to space, Grace asks, “Honey, can you pick up the dry cleaning on your way home?”