Just Go With It - Catholic Courier 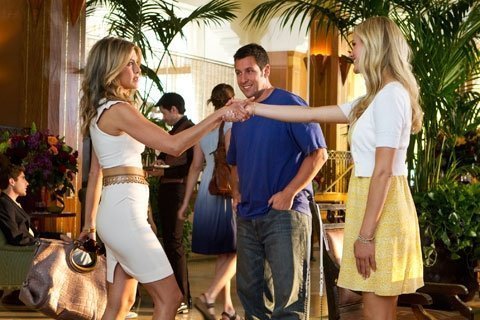 NEW YORK (CNS) — Take a sophisticated classic farce — set it in Hawaii — then trash the piece, and you have "Just Go With It" (Columbia).
?
In this very loose — and sloppy — remake of 1969’s "Cactus Flower," director Dennis Dugan and screenwriters Allan Loeb and Timothy Dowling supply Adam Sandler with the overload of potty humor on which nearly all of Sandler’s films seem to depend, along with stale dialogue that quickly depletes audience sympathy for Sandler and the other stars.
?
What was originally a sweet adult romance involving an escalating series of funny complications and a modest message about being true to one’s self thus becomes comatose almost from the start.
?
The latest version has been badly unmoored from the plot lines of the earlier film — which featured Walter Matthau, Ingrid Bergman and Goldie Hawn — the Broadway staging that preceded it, and its French source play. In those, a philandering dentist tells his many girlfriends he’s trapped in a bad marriage, a claim that not only earns him sympathy and physical affection, but also provides an easy escape hatch from commitment.
?
Once the playboy finally decides to settle down, however, he needs to produce a "wife" he can ostensibly divorce, an effort in which he enlists his spinster nurse, who, it turns out, is secretly in love with him.
?
Here, Sandler plays Danny, a plastic surgeon, with Jennifer Aniston as his assistant Katherine. No lovelorn old maid is she; instead, she’s a sensible divorced mom raising precocious kids Maggie (Bailee Madison) and Michael (Griffin Gluck). The young woman Danny decides to marry is schoolteacher Palmer (Brooklyn Decker, most famous as a Sports Illustrated swimsuit model).
?
Palmer, who remembers the pain of her parents’ split, decides she wants to meet and befriend Danny’s spouse, and is even more delighted to learn there are children involved. This launches a series of deceptions, including a "lover" for Katherine — a role into which Danny drags in his cousin Eddie (Nick Swardson) — and a "family" vacation in the Aloha State that gives Decker an excuse to don a bikini.
?
Within this misguided updating, the available outlets for comedy involve a long series of bathroom references, sight gags of botched plastic surgery, and the appearance of Katherine’s old "frenemy" Devlin (Nicole Kidman), who gets caught in some lies of her own.
?
The original story may be redolent of snap-brim fedoras, Vitalis and cigarettes, but at least it had a warm heart this version distinctly lacks.
?
The film contains an implied premarital situation, considerable scatological humor, sexual banter and fleeting crude language. The Catholic News Service classification is A-III — adults. The Motion Picture Association of America rating is PG-13 — parents strongly cautioned. Some material may be inappropriate for children under 13.
?
– – –
?
Jensen is a guest reviewer for Catholic News Service. More reviews are available online at www.usccb.org/movies.