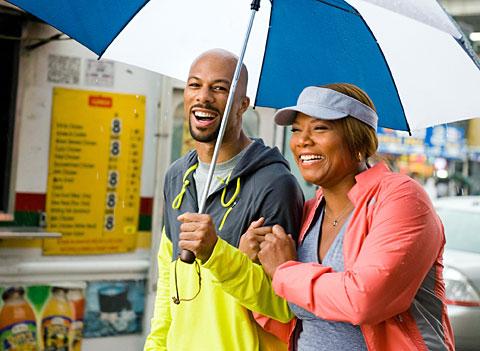 NEW YORK (CNS) — The familiar elements of both romantic comedy and inspirational sports films are seamlessly blended in "Just Wright" (Fox Searchlight).
Queen Latifah plays Leslie Wright, a super-competent physical therapist and hardcore New Jersey Nets fan who has come to accept – however ruefully — her status as every guy’s nonromantic homegirl.
Her younger, attractive "godsister," Morgan Alexander (Paula Patton) — who lives with Leslie and Leslie’s parents, Lloyd and Janice (James Pickens Jr. and Pam Grier) — has a singular ambition: to become the wife of a professional basketball player. Morgan is hopelessly shallow, interested only in status and shopping.
When Leslie has a chance encounter with New Jersey Nets star Scott McKnight (rapper Common), he finds her confidence and sunny personality appealing, and invites her to a party at his mansion. Leslie brings the flirtatious Morgan along; Scott impulsively falls for Morgan, and almost as quickly, decides to marry her.
This could be just another bitter episode for Leslie, except that Scott gets a potentially career-ending knee injury. Morgan finds Scott’s fetching blond therapist a threat, so she asks Leslie to move in and go to work in her stead.
Unwilling to endure possible hardship, Morgan eventually runs off when it looks as if the Nets won’t give Scott a new contract.
Will Scott’s knee recover in time for the playoffs? Will Leslie’s tough love restore the whole man? Will they bond over their love of classic jazz, and will he finally see that Leslie is perfect for him? Well, the script has the Nets in the NBA finals, so those willing to surrender to all the fantasy elements will likely have a very good time indeed.
Director Sanaa Hamri and screenwriter Michael Elliot (who wrote the engaging 2002 basketball comedy "Like Mike") use the lightest of touches to create a warm, likable environment and convey a message about relationships founded on enduring values.
Probably acceptable for more mature teens, despite the elements listed below.
The film contains a single use of crude language and an implied premarital encounter. The Catholic News Service classification is A-II — adults and adolescents. The Motion Picture Association of America rating is PG — parental guidance suggested. Some material may not be suitable for children.
– – –
Jensen is a guest reviewer for Catholic News Service. More reviews are available online at www.catholicnews.com/movies.