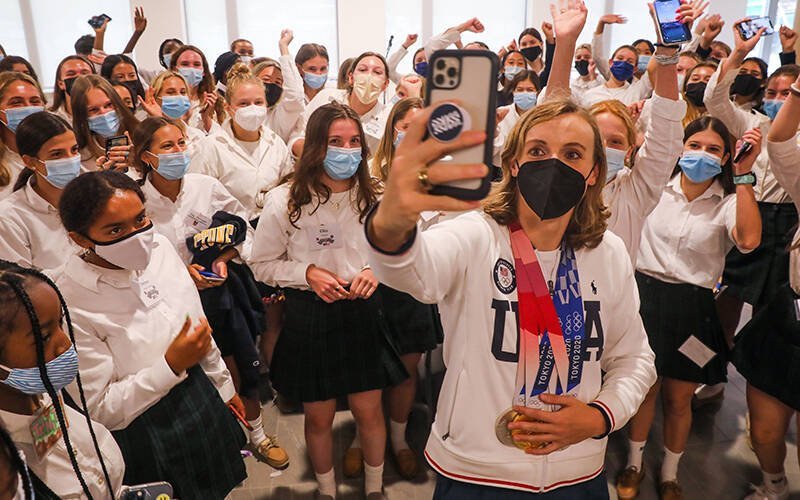 Katie Ledecky takes a selfie with students during her alma mater visit to Stone Ridge School of the Sacred Heart in Bethesda, Md., Sept. 17, 2021. (CNS photo by Andrew Biraj/Catholic Standard)

BETHESDA, Md. (CNS) — For three-time Olympian Katie Ledecky, her incredible journey to winning four more Olympic medals at the Summer Games in Tokyo began many years ago and winds through several roads.

Among them are two Catholic schools in the Archdiocese of Washington, a few area pools and the tight-knit community of her Bethesda hometown.

Stone Ridge School of the Sacred Heart, where she graduated from high school in 2015, gave Ledecky a hero’s welcome Sept. 17.

She stopped by the all-girls Catholic school in Bethesda to share stories of her recent Olympic experience, of how she became a remarkable distance swimmer and to encourage the students in their future aspirations.

But most of all, she wanted to convey her deep gratitude for the lessons she was taught and the support she received from Stone Ridge going back almost a decade ago when she first hit the world’s stage in international swimming competitions.

“It’s so great to be back here at Stone Ridge,” said Ledecky, emphasizing to the students that it’s where her Olympic story first unfolded. Ledecky was a rising 15-year-old Stone Ridge sophomore in 2012 when she won her first gold medal in the women’s 800-meter freestyle race during the London Olympics.

“Thank all of you for the support this summer. It meant so much to me. It was really impactful. We had no family or friends (able to attend the Tokyo games due to COVID-19 precautions). … We felt the cheers,” said Ledecky.

In Tokyo, 24-year-old Ledecky won her 10th Olympic medal for swimming, adding two gold and two silver medals to her collection. She won the inaugural gold in the women’s 1,500-meter freestyle swim, a first-time Olympic event. In the 800-meter freestyle race, she touched the wall at 8:12:57, repeating her gold medal success from 2012 and 2016 in that race.

“Yeah, it’s kind of cool. They’re very heavy,” Ledecky told the Stone Ridge middle schoolers about the shiny Olympic hardware hanging around her neck after receiving a rousing welcome as she entered the cafeteria.

Students’ questions covered an array of topics such as:

— “What were her favorite classes at Stone Ridge?” (math, science, AP psychology, which she majored in at Stanford University, where she graduated in 2020).

— “What is her swim training schedule? (20 hours per week, in the pool twice a day and dry land training).

— “What’s on her playlist?” (not much country music, she said with a laugh, but a little bit of everything else — rock, pop, and oldies.)

During a brief break between talks to students, Ledecky spoke with the Catholic Standard, Washington’s archdiocesan newspaper.

She reflected on her Catholic faith and what it meant to her during the difficulties of the pandemic. Yes, she still says the Hail Mary prayer before every race to calm any nerves, just as she did at the 2012 and 2016 Olympics.

“My faith remains very important in my life, especially the last two years,” said Ledecky, adding how much being able to “attend” Mass virtually every week with her family whom she hadn’t seen in person since December 2019, helped her through the challenges of the pandemic. “My faith is strong, and I realized more how important that is.”

The Stanford University Catholic community and her godfather, Jesuit Father Jim Shea, whose livestream Masses were celebrated at a parish in Charlotte, North Carolina, kept her going spiritually during the global shutdown.

She had to pivot her swim training from the university to a nearby Palo Alto, California, backyard pool and had to cope with the initial disappointment of the 2020 Olympics being postponed for one year.

The day before returning to Stone Ridge, Ledecky said she was pleased to pay a similar visit to her elementary school alma mater, Little Flower School in Bethesda, where she also chatted with students. She spent time there with another group of longtime supporters — the Immaculate Heart of Mary sisters who taught her and Msgr. Peter Vaghi, the pastor of Little Flower Parish.

She praised her Team USA teammate Phoebe Bacon, a fellow Stone Ridge and Little Flower School alumnae, who competed in her first Olympics, coming in fifth place in the women’s 200-meter backstroke.

“It was great having her on the team. It was probably the most time I’ve ever got to spend with her,” she said. “She brought so much energy.”

Among her answers to all the questions posed to her, Ledecky said she began swimming at age 6, because her older brother, Michael, swam for their neighborhood community pool, and she always looked up to him.

She played other sports such as basketball and soccer early on, but eventually became singularly focused on swimming. “I just loved being in the water,” she said.

Ledecky told the girls she was driven by always setting new goals for herself and said the best coaching advice she received still resonates with her: “Stay true to your goals. Put in the work. … enjoy the journey, do not just focus on the end result.”

“I’ve taken that to heart and enjoyed the training it takes,” said Ledecky, adding that time management was a large part of successfully balancing a busy academic and athletic life, a valuable tool she began practicing while at Stone Ridge that came to serve her well in college.

“I learned that here and used every minute that I could” to finish homework, study ahead for exams, as well as get plenty of rest, but also spend precious time with friends, family and on her other hobbies — playing the piano, chess and Scrabble, she said.

Her proudest moments, she said, are not the Olympic medals, but the happiness she’s found in the communities she has been a part of over the years — Stone Ridge, Stanford University and Bethesda.

“Yes, (the medals) are heavy, but they are small relative to all the hard work from my family, my parents, my brother,” she said. “(The medals) are a great symbol (of the work). It takes a village. I wish I could give medals to all of you.”

As she prepares for the next chapter of her life, Ledecky said her immediate plans include possibly starting graduate school, definitely preparing to compete at the 2024 Paris Olympics, and then it’s a big maybe about the Los Angeles summer games in 2028.

Beyond that, she’s not sure what the future holds. But swimming in some fashion, she said, will always be a passion of hers.

“I’m lucky to have this great community,” she said. “I couldn’t do any of it without their support.”

Boyle writes for the Catholic Standard, newspaper of the Archdiocese of Washington.