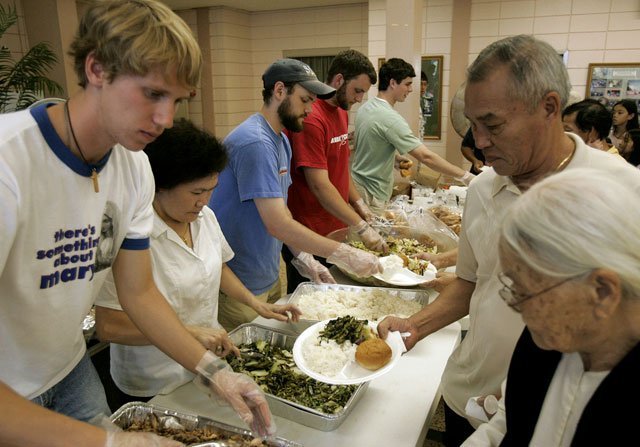 Seminarians serve food to Hurricane Katrina evacuees in 2005 at a temporary shelter in Baton Rouge, La. From the time the storm struck New Orleans through February 2006, Catholic Charities in the Baton Rouge Diocese served 103,187 people, and received more than $17 million in grant funding that was distributed in myriad of ways.

BATON ROUGE, La. (CNS) — Ten years later the memories still linger for Carol Spruell, as if they happened yesterday but perhaps were a lifetime ago.
She remembers the chaos, despair, uncertainty and the cries for help from so many and workweeks that had no end in the days and months following Hurricane Katrina. She also remembers the lines, droves of desperate people who had lost everything in Katrina’s floodwater, who were seeking any modicum of relief, whether it was articles of clothing, a bus ticket to a relative’s house outside of the area or assistance in finding a place to live.
"I remember pulling into the parking lot at 7 or 7:30 in the morning, and there would already be a line of people down the driveway," said Spruell, communications director for Catholic Charities of the Diocese of Baton Rouge. "There were probably 300 people before we even got close to opening our doors."
"That was with very little publicity; strictly word of mouth about what we were doing. We knew if we did a lot of publicity about what we were doing, what kind of assistance we were giving, we would get mobbed," she said.
The routine varied little. Each morning, the number of caseworkers available for that day and how many evacuees they would be able to assist were determined. The staff would go down the line and count to that number, giving each person a ticket. Those not fortunate enough to receive a coveted ticket were told to return the following day.
"It was tough," she said. ‘"Just the physical toll was one thing. We worked really long days, 12-hour days, seven days a week. We had our families to take care of. That life still had to continue."
Because of the chaos, Catholic Charities, which was then called Catholic Community Services, was forced to transform itself from a recovery agency to a first responder.
The agency was able to locate emergency housing for more than 400 evacuees and relief workers, donate tens of thousands of dollars of gas cards, provide bus tickets to allow family members to reunite and direct truckloads of food and other critical supplies to rural church parishes, who were in dire need of assistance in the weeks after Katrina.
"Every case is different, every family situation is different," Spruell said. "One family may have needed a deposit for an apartment that they were lucky enough to find. Another might have needed to look for people they had been separated from. Some people needed help in developing a (recovery) plan. As time went on, the needs changed.
From the time the storm struck New Orleans through February 2006, Catholic Charities in the Baton Rouge Diocese served 103,187 people, and received more than $17 million in grant funding that was distributed in myriad of ways. They provided counseling and case management services to nearly 10,000 people. They clothed nearly 30,000 people, and provided more than $1 million in utilities assistance to nearly 20,000 people. More than $2 million in financial assistance was directed to nearly 80,000 people and included mortgage and rental assistance.
"We take a lot of pride in answering the call," said David Aguillard, Catholic Charities executive director, who explained that the agency met short-term needs and also worked on long-term recovery.
The Society of St. Vincent de Paul also was at the forefront in helping evacuees in the diocese by distributing meals, providing temporary shelter and warehousing donations from around the world.
St. Vincent assisted more than 70,000 individuals from the time of the storm through the end of 2005.
"What I remember most about Katrina is the wonderful way our church responded," said Society of St. Vincent de Paul executive director Michael Acaldo. "The Catholic response was phenomenal."
He said in the darkest days he saw hope in the generosity pouring in from every corner of the world. And he continues to see that hope.
"I think the hope is God," he said. "After Katrina when we needed God the most, God’s disciples were out there doing all of the work."
– – –
Meek is editor and general manager of The Catholic Commentator, diocesan newspaper of Baton Rouge.
Copyright © 2023 Catholic News Service, Inc. All rights reserved. Linking is encouraged, but republishing or redistributing, including by framing or similar means, without the publisher's prior written permission is prohibited.