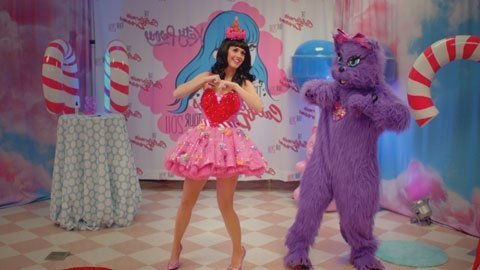 NEW YORK (CNS) — An interesting sociological study could be made that less than a decade separated the Billboard chart appearances of the Beatles’ "I Want to Hold Your Hand" and the Raspberries’ "Go All the Way." Fast forward to 2008 and the campily costumed central figure of the concert film "Katy Perry: Part of Me" (Paramount) was having a breakthrough hit with a ditty called "I Kissed a Girl."

Suggestive and even blatantly sexual lyrics are nothing new in pop music of course. The issue here is the youthful following Perry attracts: On screen at least, her fans seem to range from toddlers on up, but with a heavy concentration in the pre- and early teens. Yet the sight of Perry imploring an imaginary young man of her fancy to "Show Me Your Peacock" is one that parents will almost certainly find unsuitable for their kids.

Add to that a strongly reinforced message promoting individualism without limit — and at least implying acceptance of a gay lifestyle — and it would seem imperative to mark these mildly entertaining but overlong proceedings, helmed by Dan Cutforth and Jane Lipsitz, as off limits to the target demographic.

None of which is to deny that the Perry who emerges in this profile has her moral strong points. Her generous interaction with her star-struck admirers reaches a poignant climax when she fulfills the titular mission of the Make-A-Wish Foundation for one ailing but delightedly dazzled boy.

We also see her making apparently extraordinary — though, sadly, unsuccessful — efforts to salvage her short-lived marriage to British comedian and actor Russell Brand.

The pop diva’s outlook on her Christian upbringing — both Perry’s parents are Pentecostal ministers — is more ambiguous. She explicitly asserts her belief in God, but states that, unlike Mom and Dad, she’s not necessarily on board with "the details."

By that she may only mean the unusually severe strictures with which her younger years were surrounded. Not only was all non-Christian music verboten in Ma and Pa’s home, so too, we learn, were such presumably devilish literary items as "The Wizard of Oz" and "Alice in Wonderland." On the other hand, "the details" Perry dismisses may take in a great deal more, extending to vital aspects of the Judeo-Christian heritage.

Either way, only those viewers seasoned enough to sort it all through should make their way to the box office.

The film contains some suggestive outfits and dancing, mature references, including to homosexual behavior, obvious double entendres, childish scatological humor, at least one mild oath, a censored crude term and a bit of crass language. The Catholic News Service classification is A-III — adults. The Motion Picture Association of America rating is PG — parental guidance suggested. Some material may not be suitable for children.