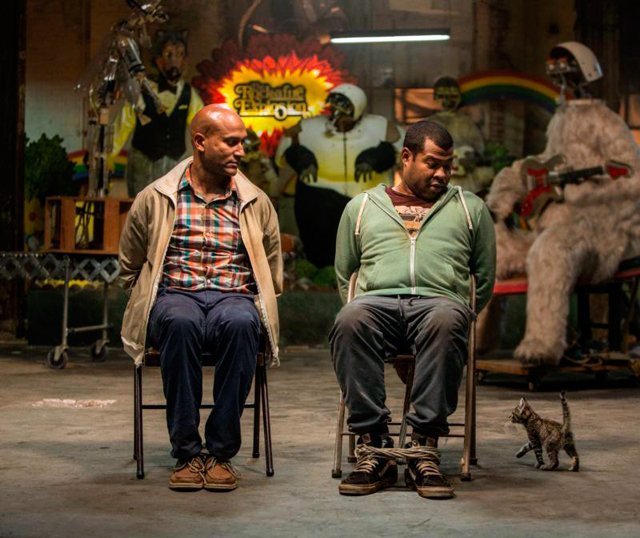 Keegan-Michael Key and Jordan Peele star in a scene from the movie "Keanu." The Catholic News Service classification is O -- morally offensive. The Motion Picture Association of America rating is R -- restricted. Under 17 requires accompanying parent or adult guardian.
By John P. McCarthy
Catholic News Service
NEW YORK (CNS) — Keegan-Michael Key and Jordan Peele of the acclaimed Comedy Central television series "Key &amp; Peele" star in the satirical action-comedy "Keanu" (Warner Bros.).
The duo’s brand of socially aware humor, which frequently considers the influence of pop culture on racial identity, translates well to the big screen.
The catch is that they’re bound to mimic what they spoof. And so, in crucial areas, their movie traffics in precisely the material they’re sending up.
Thus, despite a plot that hinges on an adorable kitten, an abundance of foul language renders the effort unavoidably distasteful. That’s too bad, because the cursing — taken together with the details of a gritty milieu — mars an amusing and insightful commentary on how mass-media offerings create and enforce race-related stereotypes.
Key and Peele are engaging, relatable performers whose combination of shrewdness and goofiness allows them to deal with such sensitive topics in a way that reliably triggers laughter as well as reflection. It helps that their cinematic and musical references are mainstream and difficult to miss.
They portray two nerdy African-American residents of Los Angeles who find themselves in an uncomfortable and precarious situation. After a drug dealer and his crew are ambushed while packaging their wares inside an abandoned church, the only survivor is a cute if mangy kitten. The cat escapes and ends up on the doorstep of graphic artist Rell (played by Peele, who co-wrote the script with Alex Rubens).
Rell is depressed because his girlfriend just dumped him. But the kitty, which he dubs Keanu — a nod both to the eponymous movie star and to his
Hawaiian name’s original meaning, "cool breeze" — lifts his spirits. When Keanu is abducted several weeks later, Rell’s cousin, Clarence (Key) — a straitlaced family man who drives a minivan and listens to George Michael — vows to help find him.
Their search takes them to the strip-club headquarters of an inner-city gang. Far out of their comfort zones and potentially subject to great bodily harm, they spontaneously pose as murderous street thugs, anointing themselves Tectonic and Shark Tank. For their gambit to succeed, they’ll have to prove themselves during a drug sale at the Hollywood Hills home of a movie actress.
At one juncture, Rell scolds Clarence, "You sound like Richard Pryor doing an impression of a white guy." In addition to being accurate, this line reveals how conscious Key and Peele are of showbiz history — and, more significantly, of the complexities of contemporary racial identity. In fact, if their multi-layered comedy lacked wit, it could be considered incendiary.
While wisecracking about African-American stereotypes and lampooning the grandiosity and tired conventions of gangster movies, "Keanu" also pokes fun at the coded language and behavioral types associated with other ethnic groups.
Will Forte plays a Caucasian pot dealer whose speech pattern and cornrows indicate he desperately wants to be black. And the appearance of actor Luis
Guzman — a fixture in crime flicks over the last four decades — in the role of a drug lord implies Hispanics are not immune to prejudicial pigeonholing, either in real life or in art.
Director Peter Atencio, who helmed numerous episodes of "Key &amp; Peele," keeps the focus on his two stars. Their approach is generally lighthearted and good-natured.
Yet the disrespectful tone suggested by having a place of worship serve as a narcotics den is carried over in subsequent references to God. And the underworld atmosphere is reinforced both with bloodletting and with the bodies of exploited women.
The film contains scenes of sometimes gory violence, much drug use, some irreverence, upper female and rear nudity, occasional profanity as well as pervasive rough language. The Catholic News Service classification is O — morally offensive. The Motion Picture Association of America rating is R — restricted. Under 17 requires accompanying parent or adult guardian.
– – –
John P. McCarthy is a guest reviewer for Catholic News Service.
Copyright © 2022 Catholic News Service, Inc. All rights reserved. Linking is encouraged, but republishing or redistributing, including by framing or similar means, without the publisher's prior written permission is prohibited.