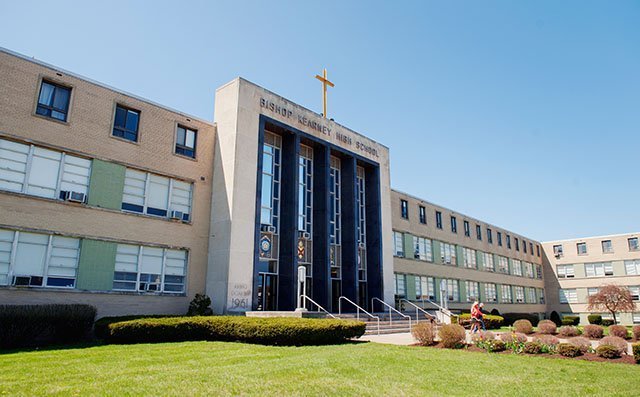 Representatives announced May 6 that Bishop Kearney High School has purchased the Irondequoit property that is the site of the school.

IRONDEQUOIT — Over the two decades since Mark Battle joined the Board of Trustees of his alma mater, rumors periodically have circulated that Bishop Kearney High School could be closing.

But closure is no longer a threat now that the Irondequoit school owns its 125 Kings Highway building as well as the surrounding 42-acre campus, according to Battle, chairman of the school’s board of trustees.

School officials said Bishop Kearney had been in limbo until recently because of uncertainty about the religious orders’ plans for the building and property.

"It gives us a future," Bishop Kearney’s president and CEO, Thomas O’Neil said of the building purchase. "Until we had control of our building, no one was sure if we had a future."

Battle said purchasing the building enables the school to plan capital improvements, including an immediate repaving of the school’s pitted parking lot, replacement of lighting with energy-efficient fixtures, and possibly the installation of artificial turf on athletic fields.

The school’s mortgage on the building and property will be held by Main Street Fishers LLC, whose 1 Fishers Road address is the same as that of the B. Thomas Golisano Foundation, a foundation set up by Golisano to give grants to local programs for people with disabilities.

Golisano did not attend the May 6 press conference announcing the purchase, but in a statement called Bishop Kearney "the unsung hero of Rochester education."

"We welcome the partnership with him on many levels," said Mark Wazowicz, the school’s vice president of media and technology. "We appreciate him as a business owner and a leader in the community, and he assists us in what we do here every day."

Although Golisano, an Irondequoit native, did not graduate from Bishop Kearney, he has been a longtime supporter of the school. In 2007, he donated $3 million each to Bishop Kearney and Brighton’s Our Lady of Mercy High School for curriculum updates to enhance their focus on college preparation. In 2013, Golisano also helped to establish the B. Thomas Golisano Scholar Fund to provide scholarship assistance to newly enrolled Kearney students from the greater Rochester area.

Using the 2007 donation, Bishop Kearney created its College Prep Plus program, which requires students to take 32 credits to graduate and maintain a challenging schedule of classes during their senior years. At that time, the school was rebranded as "a Golisano Education Partner," adopted technology upgrades and began providing each incoming student with a free laptop computer.

"Our school infrastructure is in very good condition, and we invested heavily with Tom’s gift in 2007 in technology," Battle said. "Our technology is state of the art and probably rivals public schools."

Senior Michael Cattalani, 18, of Greece, said the announcement of the building’s purchase was welcomed by students.

"It’s great for enrollment and for fixing all the things that need fixing," he said.

The privately operated school, which has about 400 students in grades 7 to 12, is affiliated with the Diocese of Rochester and is a part of the Edmund Rice Network of Schools. In July 1999, the Christian Brothers Institute had transferred ownership of Bishop Kearney High School — but not the building it has occupied since its founding in 1962 — to the lay board of trustees.