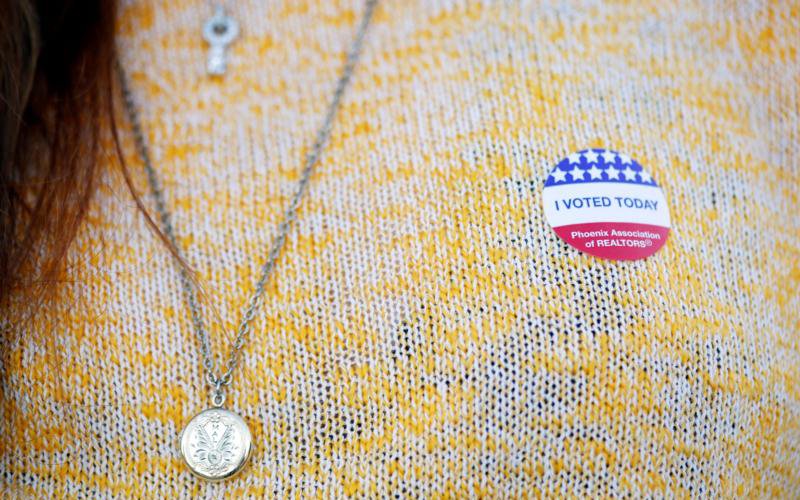 A sticker on 18-year-old Victoria Leach's sweater is pictured after she voted with her parents in the midterm elections Nov. 6 at a polling station in Carefree, Ariz. (CNS photo by Nicole Neri/Reuters)

WASHINGTON (CNS) — A group of Catholic high school seniors lobbying on Capitol Hill Nov. 5 knows there is a lot at stake in the midterm elections.

They feel strongly about current issues, especially immigration and more specifically, DACA — the Deferred Action for Childhood Arrivals program, which protects these students and other young people who arrived in this country as children with their parents without documentation.

They feel strongly about voting too, but they can’t.

The three 17-year-old seniors from Brophy Prep High School, a Jesuit boys school in Phoenix, spent part of the morning Nov. 5 speaking to an aide for U.S. Sen. Jon Kyl, R-Arizona, primarily about immigration reform and DACA. They’re too young to vote, but two of them, as DACA recipients, couldn’t vote anyway even if they were of age.

None of this stops them though.

Saul Rascon Salazar, one of the DACA recipients, said people who don’t vote are “throwing away an American privilege.”

He said he urges people not interested in voting to “keep us in mind” and also tells other teenagers to support him or be there for him by voting if they are eligible to do so.

“In all honesty, our lives depend on it,” he said, noting that he could “continue to be in limbo” if DACA legislation stalls. The issue has been key in Arizona election campaigns. Since the Trump administration has resolved to phase out DACA recipient protections, it is up to Congress to keep the program intact.

Nikolas Kirk, the other senior from Brophy Prep who spoke to Catholic News Service Nov. 5, said that even though he isn’t a DACA recipient, he is concerned about the issue that affects so many and he also feels it’s important from a faith perspective.

Even though he is too young to vote, he said there is still plenty that can be done. For starters, he has spoken with his family about key issues and said he changed his dad’s vote on one candidate.

He doesn’t get why people don’t vote, or as he more strongly put it: “The position of apathy is morally incorrect.”

The group of seniors, in suits and ties, who visited aides for House members from Arizona Nov. 1, were primarily in Washington to attend the Ignatian Family Teach-in for Justice Nov. 3-5, an annual gathering for students from Jesuit schools and parishes around the country with speakers, breakout sessions and Capitol Hill lobbying. About 1,500 students attended the teach-in.

This is the 20th year for the event. This year’s gathering wrapped up just before the election, but it usually has taken place in mid-November to commemorate the Jesuit martyrs of El Salvador — the six Jesuit priests and their two companions who were killed Nov. 16, 1989.

During the event the Brophy students talked about their support of DACA students with the school’s “DREAM On Campaign” of advocacy work promoting the DREAM Act, the Development, Relief and Education for Alien Minors Act.

The bipartisan bill in Congress outlines a path to U.S. citizenship with various requirements and would cover those with DACA status and others in the country without legal documents. DACA recipients are called “Dreamers.”

“Our voice was heard, “Basto said, noting that other students came up to them asking how they could help.

“It was important to have a platform to speak” and represent all the other students who deal with immigration issues, he said.

He says meeting with House and Senate aides also hopefully made an impact because as he knows all too well: “DACA is about lives.”

Will Rutt, director of Ignatian Service and Advocacy at Brophy Prep, and one of the chaperones of the school’s 12 students who came to Washington, said a key aspect of the Capitol Hill meetings was to provide the students with the opportunity to be in contact with people who can make things happen.

But on another level, he said, discussing issues that are important from a faith perspective gives a deeper sense of “what it means to live out our faith in the modern world.”