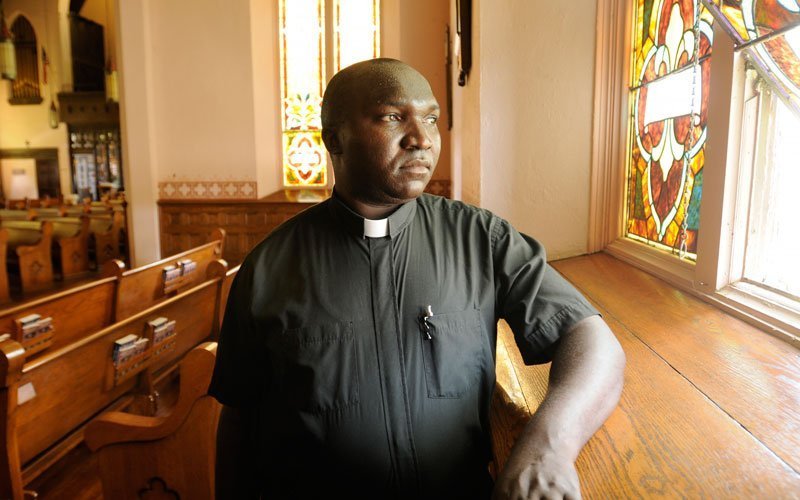 Father John Orenge Omboga’s vocation was inspired while he was still a youngster growing up in the Diocese of Ngong, Kenya.

As an altar server, the young boy watched several missionary priests struggle to master the local dialect and reflected on how lucky he was because the language came easily to him.

“I felt that I should take the challenge. I requested whether I could be recruited to join the major seminary, a request that the missionary pastor accepted wholeheartedly,” Father Orenge Omboga wrote in the July 13 bulletin for Our Lady of the Lakes Catholic Community.

Several decades later, Father Orenge Omboga now finds himself living amidst Catholics in a foreign land, and, like the missionaries who inspired him, trying to adapt to a new culture and lifestyle. On July 5 he became parochial vicar for Our Lady of the Lakes, which comprises six churches in Penn Yan, Naples, Rushville, Stanley, Dundee and Prattsburg.

Father Orenge Omboga was ordained March 30, 1996. He served as rector of a minor seminary and as an assisting priest and later as a pastor for several parishes in the Diocese of Ngong. In 2002 he left Kenya and came to the United States to study at St. John Fisher College in Pittsford, which had awarded him a scholarship.

He lived and helped out at Our Lady of Lourdes Parish in Brighton while attending St. John Fisher, and on May 10 he graduated with a master’s degree in human-resource development. Father Orenge Omboga said he hopes that degree will help him assist his people when he returns to Kenya in two years.

Until then, however, he’s focused on helping people here in the Diocese of Rochester. After leaving Our Lady of Lourdes shortly after his graduation, Father Orenge Omboga served as a temporary sacramental minister at Our Lady of the Valley Parish in Hornell during the month of June. The next month he arrived in Penn Yan to replace his predecessor, Father John Gathenya. A former extern priest from the Diocese of Nakuru, Kenya, Father Gathenya was incardinated into the Rochester Diocese in October 2007 and is now parochial administrator of Our Lady of the Snow Parish in Weedsport.

Father Gathenya had served Our Lady of the Lakes for four years, and in 2004 he helped forge a link between the Catholic community and his hometown of Subukia, Kenya. Our Lady of the Lakes parishioners began a project called St. John’s Kenyan Outreach, and through this project they raised money to renovate St. John’s Small Home, a residence for needy and disabled children run by St. John Parish in Subukia.

St. John’s Kenyan Outreach took off, and within a year parishioners had raised more than $13,000 for the home and its residents. Parishioners continue to sponsor individual residents, and have raised money for a vocational school at the site, which currently is in the final stage of construction, according to Katie Robinson, chairperson of St. John’s Kenyan Outreach.

Father Gathenya will continue to be involved with the outreach, but Father Orenge Omboga also has incentive to become involved.

The outreach project is just one of Father Orenge Omboga’s interests, however. One of his favorite parts of ministry is visiting with families, which is something he used to do often in Kenya.

“Most of them were not Catholic, so you go there and visit them and introduce Jesus Christ to them,” he recalled to the Catholic Courier. “You just walked around and stopped at houses. You introduced yourself and your intention, and they welcomed you and asked questions.”

Father Orenge Omboga isn’t able to visit Our Lady of the Lakes families as frequently as he’d like because he’s found that American parents are often on the go, either working themselves or taking their children to and from school, sports or extracurricular activities.

“Because of not finding people at home, that becomes a challenging task. Here you have to make an appointment,” he said.

Father Orenge Omboga also plans to work with the youths of Our Lady of the Lakes and find ways to encourage their increased participation in parish life and events.