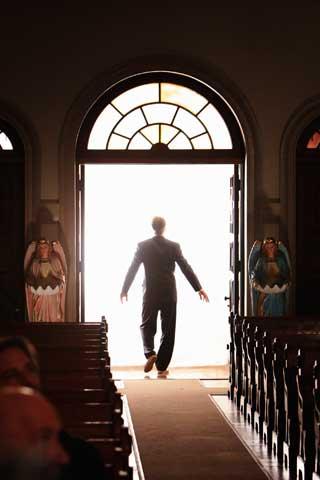 John Terry walks out the door of a church in a scene from the series finale of the ABC TV show "Lost." This scene from the episode named "The End" was filmed at Sacred Hearts Academy in Honolulu.

HONOLULU — The gateway to heaven is through the chapel doors at Sacred Hearts Academy in Honolulu. Or so one could argue after watching the series finale of the ABC-TV show “Lost” in late May. Several key scenes in the last episode were shot at the all-girls Catholic school.

The finale’s penultimate scene showed the major characters from the TV show’s six seasons reuniting after their deaths in a church before “moving on” to another life, as character Christian Shephard called it in the episode, named “The End.”

It is Shephard who opens the main church doors, guarded on each side by an angel statue. Through the doors comes a blazing stream of light that fills the church and engulfs all of the waiting characters.

Several other scenes in the episode showed a coffin arriving at the front of the school grounds, characters talking in a lunch pavilion area outside the chapel, and Shephard and his son, Jack, talking in an office just outside the church.

Despite an attempt to make the scenes seem nondenominational, with Christian and Jack Shephard talking in an office filled with world religious symbols and a multi-faith stained-glass window, many TV critics and fans have interpreted the church to be a sort of purgatory and all of the characters as moving on to heaven, a very Christian ending to “Lost.”

Sacred Hearts Academy has a few “Lost” fans on its faculty and staff, who never missed an episode and were thrilled to see their school featured so prominently in the “Lost” finale.

“When I watched it, I was laughing,” said Toni Normand, director of special programs. “I called my husband in and said, ‘Heaven is right outside of the chapel lanai!'”

“It was fun to think that all those actors were hanging out in our chapel,” said Lisa Vega, the school counselor. “It just feels special that they picked the final scene to be here with the whole cast.”

She and Normand joke that they can now go to heaven any time they are on campus.

“Lost” filmed at Sacred Hearts Academy during three days in March and April. Resident manager and maintenance supervisor Misha Roytman was the only school employee at the academy during filming. He said the “Lost” crew had tight security and kept any extra people from coming into the chapel during shooting.

“They were very polite but very strict with their own rules,” Roytman said. He got to peek around a corner to see a little filming but for the most part didn’t see any cast members.

School business manager Randy Iwashita was the go-between with the “Lost” staff as they planned to film at the school, and he said they were professional and cordial. “They asked to use the school cafeteria for a gathering,” he said.

The school was able to grant that and other accommodations, such as moving faculty cars out of the front parking lot early on the afternoon before shooting. However, Iwashita said the school had to say no to the crew’s request to build a set near the chapel because of disruptions it would have caused to the school day.

Sacred Hearts Academy’s head of school, Betty White, said the school doesn’t normally rent its facilities out but had made an exception for “Lost” last year when the chapel was used in a season five episode.

When “Lost” production staff approached the school earlier this year about filming again at the academy, White said it was providential timing. She had just received a pricey estimate on repair costs to one of the chapel’s large stained-glass windows.

In exchange for filming, “Lost” donated the needed amount for repairs. “It was as if God was helping us,” White said.