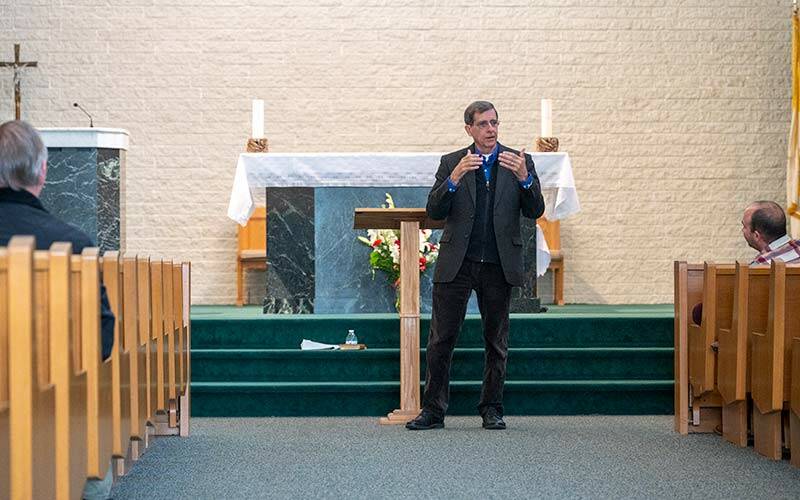 GATES — As Dave Nodar entered his late teens, he began putting the party life ahead of his Catholic faith — yet he never felt quite right about that lifestyle.

“For two years, I had been trying to get out of it. I knew things were not working out the way they were supposed to,” Nodar said Oct. 15 during his keynote address at the ExultRochester Catholic Men’s Conference, conducted at Parish of the Holy Family.

In the middle of one party, Nodar experienced a growing ache and, although he was surrounded by friends, “I really felt like I was alone.” He then began moving toward a conversion with the aid of his grandmother’s prayer intercessions, his mother’s encouragement to read the New Testament and a friendship with a parish priest.

Perhaps the most powerful influence, he said, came in the early 1970s from a friend who had become a Christian and spoke openly about his faith.

“He was peaceful, he was joyful — qualities he did not have previously. I called him up and said, ‘I want what you have, but I don’t know how to get it,’” recalled Nodar, who was 20 years old at the time. “He said, ‘Get down on your knees and pray out loud to Jesus.’ So I did and said, ‘Jesus, help me.’”

“I experienced the flooding of God’s love into my life from head to toe and his forgiveness,” Nodar added, “and had this absolute certainty that I could change by the power of God.”

In the years following his conversion experience, Nodar was strongly moved by St. John Paul II’s teachings on evangelization. The late pope’s influence eventually led Nodar — who was born in Rochester — to establish ChristLife in 1995 as an apostolate of the Archdiocese of Baltimore, where he now resides. Since then, according to Nodar, the movement has spread to nearly 250,000 people across the United States and beyond, including several parishes in the Diocese of Rochester.

ChristLife is a three-part process, with each segment featuring small-group sharing over a seven-week period. The program emphasizes discovering Christ, then following him more fervently. From there, participants are urged to share their deepened faith with others, just like Nodar’s friend did with him some 50 years ago.

Father William “Mickey” McGrath, who served as master of ceremonies for the men’s conference, noted that he sought to begin ChristLife locally while serving as pastor of Rochester’s St. Frances Xavier Cabrini Parish from 2014 to 2020.

“It was tremendously renewing for the people in the parish,” said Father McGrath, who now serves as pastor of Church of the Assumption and Church of the Resurrection in Fairport. “People in their 60s and 70s were saying, ‘I’ve been going to church all my life, but I’ve never really felt this close to the Lord.’”

During his men’s conference witness talk, Deacon Robert Lyons noted that his parish, St. Marianne Cope in Henrietta, conducted a successful ChristLife program a few years back; many participants still meet regularly and are currently preparing to embrace the evangelization phase that ChristLife idealizes.

In addition to Nodar’s keynote talk, the eighth-annual men’s conference featured an opening Mass celebrated by Bishop Salvatore R. Matano along with rosary recitation, confession and breakfast. The conference’s title was “Called and Sent,” meshing with Nodar’s emphasis on evangelization.

But before Catholics can evangelize, Nodar said, they need to take ample reflection time so they can grow sufficiently in their faith.

“We could just rush through life and never think about what’s it all about — why am I here, what is it that brings fulfillment and happiness to our lives?” Nodar remarked. “You may be 70 or 80 years old and never really took time to think more fully, more deeply about the reason for your existence, your purpose here.”

Creating such valuable time, he acknowledged, can be challenging “in an American culture that is intentionally, extremely crazy busy.” However, he added, it’s never too late to start trying.

“Wherever you are in life, there is always a call to conversion and a hunger for deepening one’s faith,” Nodar told the conference participants. “I want more, don’t you?”