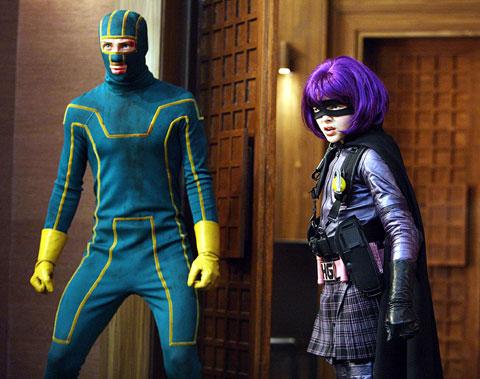 NEW YORK (CNS) — The seemingly never-ending search, among some in Hollywood, for those rare screen taboos that have yet to be toppled results in the jaw-dropping spectacle of Mindy Macready, aka Hit Girl (Chloe Grace Moretz).

She’s the blithely murderous masked tween with a fondness for spouting such vulgarities as the C-word whose viciously efficient mowing down of her enemies is central to the plot of "Kick-Ass" (Lionsgate), an intentionally outrageous but deeply perverse action comedy.

Home-schooled as an assassin by her father, Damon (Nicolas Cage) — a deranged ex-police officer who also has a costumed alter ego named Big Daddy — Hit Girl serves as an ally in Big Daddy’s feud with Frank D’Amico (Mark Strong), the straight-from-central-casting mob boss who frame-up of Damon landed the honest cop in prison. The trauma of Damon’s jail time, we learn, resulted in the death of Hit Girl’s mother and the birth of an obsessive vendetta.

As Dave soon discovers, however, it takes more than the mail-order wetsuit that constitutes Kick-Ass’ outfit to bring down the bad guys, and he first encounters Hit Girl when she saves him from the potentially fatal consequences of his well-intentioned but ill-advised overreaching.

Intent on using Kick-Ass to get to his father’s enemies, Frank’s spoiled son Chris (Christopher Mintz-Plasse), a fellow student of Dave’s, creates a persona of his own called Red Mist whose hip lifestyle includes a fancy sports car and easy access to marijuana.

As the plot approaches its ultra-violent conclusion, director and co-writer (with Jane Golman) Matthew Vaughn’s adaptation of Mark Millar and John S. Romita Jr.’s series of comic books fills the screen with bloody mayhem. Characters from either side who fall into the wrong hands find themselves crushed by machinery, riddled by Gatling guns and even exploded inside a giant microwave designed to dry lumber.