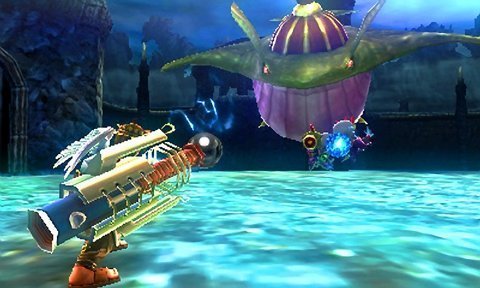 NEW YORK (CNS) — Absence, we’re told, makes the heart grow fonder; and familiarity breeds contempt. If so, there will likely be much yearning and little distaste on the part of fans for "Kid Icarus: Uprising" (Nintendo).

After all, this latest adventure for the titular character, also known as Pit — the franchise’s sprightly angelic protagonist — is only the third entry in the series since the original flew onto the Nintendo Entertainment System way back in 1986. That’s an impressive feat of restraint, considering the almost yearly installments of Nintendo’s other main franchises.

Accordingly, this newest offering — available exclusively for the Nintendo 3DS — feels fresh, at least at first; all the more so since the main story is entertaining and packed full of twists. The gamer plays in the persona of the aforementioned Pit, servant of Palutena, the goddess of light. Pit aids Palutena in her struggle, on behalf of of the forces of good, against the evil Medusa and the troops of the underworld.

As might be expected, given its title, the entire game is replete with references to Greek mythology. Yet it can hardly be called either faithful to, or overly reverential about, its sources, especially when we find incongruous alien spacecraft and superguns hurled into the mix.

So, although the implicit acceptance of large chunks of pagan lore may initially raise concerns for parents, the cartoonish, jocular way in which this material is presented signals that it need not be taken seriously, and is therefore harmless for all but the youngest gamers.

In fact, once the mythological patina is stripped away, many positive messages for youngsters emerge. These include the sanctity of life, the beauty of faith and devotion, and the rejection of a hard-line environmentalist attitude that sees humanity’s presence on the earth as a scourge instead of a blessing.

In design terms, however, "Uprising" is marred by what must be one of the least serviceable control mechanisms in gaming history.

The need to employ a stylus with one hand while keeping a grip on the console with the other — all the while manipulating the steering and shooting instruments with the thumb and forefinger of that second hand — leads inevitably to a high level of joint pain. So much so, that the title comes accompanied by a stand engineered to provide relief for the wrist — hardly a welcome accessory for a supposedly portable title.

Predictably for a Nintendo product, the presentation is flawless, with colorful sweeping landscapes and a delightful soundtrack.

However, the gameplay relies almost entirely on two styles: an on-rails air shooter by means of which Pit travels on a predetermined course, with the player controlling shooting within a small range of movement, and a ground-based third-person combat mode. Both are polished and well-executed (although the latter can feel a little clunky at times). But after a while, the game begins to feel as repetitive as the burdensome motions inducing that joint strain.

The overall result, then, is an uneven return for the Kid. Like its namesake, the game reaches ethereal heights early on, only to plunge headlong into a turbulent ocean of redundancy and soreness.

The game contains frequent action violence, pagan mythological themes as well as a few instances of mild sexual and scatological humor. The Catholic News Service classification is A-II — adults and adolescents. The Entertainment Software Rating Board rating is E10+ — Everyone 10 and older.