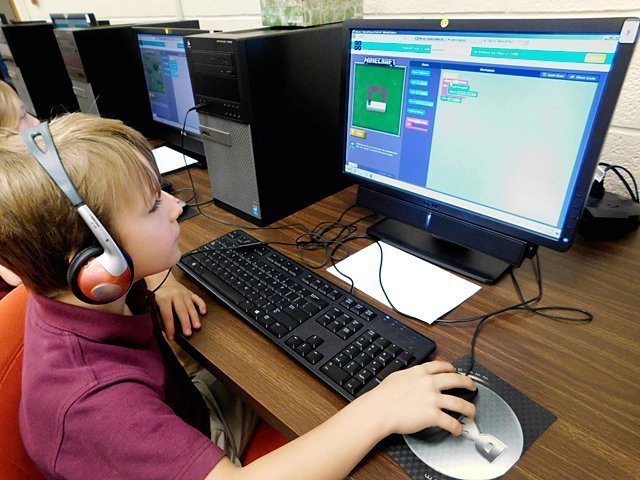 Students at Catholic schools in the Diocese of Rochester take classes in all the basic subjects one would expect: reading, writing, arithmetic, computer programming.

Surprised by that last one? In recent years computer programming has become a part of the curriculum in a number of diocesan schools, and last December students from seven schools participated in the international Hour of Code, an event designed to introduce students to computer science and take the mystery out of computer programming, or coding.

"Coding is the language of software. It is a set of instructions or commands communicating exactly how you want the software to perform," explained Susan Nagle, technology coordinator at St. Mary Our Mother School in Horseheads. "Coding makes it possible to create apps, websites, Web browsers and computer operating systems, to name a few."

Students at participating schools spent at least one hour during the mid-December Computer Science Education Week learning the basics of coding and putting that knowledge into practice through self-guided tutorials and challenges found online at code.org. Students were able to choose between themed tutorials based on such popular movies and games as "Frozen," "Star Wars" and "Minecraft," and they guided the tutorial’s characters through a series of activities by putting together brightly colored blocks of code. In the first step of the "Frozen"-themed tutorial, for example, students made Queen Elsa walk forward in a straight line by selecting the block that instructed her to move forward. Several steps later, they made Princess Anna skate in a square by selecting and stacking blocks instructing her to walk forward, turn right 90 degrees and repeat that process four times.

"They loved it," recalled Meg Henning, educational technology coordinator at St. Lawrence. "In both the ‘Minecraft’ and ‘Star Wars’ tutorials they learned how to create their own game by the end of the tutorial."

Many of Henning’s students asked to complete more than one tutorial, and Henning keeps a shortcut to code.org on the desktops of her classroom’s computers so students can practice coding when they finish their classwork early. Sister Pat McDermott, educational-technology coordinator at St. Kateri, also lets students practice coding in their free time, and Nagle said many of her students practice coding at home. Students like the challenges at such websites as code.org, Tynker.com and Kahn Academy because they are fun and allow them to be creative, and teachers like these exercises because they teach children to look closely at how things work, Henning said.

"The students are learning a valuable skill, which requires immense mathematical and critical thinking skills, and they’re having great fun in the process," Nagle added.

It doesn’t take much effort to encourage students to make the leap from stacking colorful instruction blocks to actually writing out instructions in JavaScript, which is the language of computer programming, Sister McDermott said. Nagle agreed, noting that students at St. Mary Our Mother have the option to start coding in JavaScript in second grade.

"One sixth-grader reported that over the summer he helped his grandmother set up a website with the coding and Web-building skills he learned in technology as a fifth-grader," she said.

Last September Sister McDermott teamed up with John Dupre, a parent who is a software architect, to offer an eight-week afterschool course on coding because they believe this knowledge will be valuable to their students in the future.

"Technology is everywhere and it is all driven by computers following instructions written by people," Sister McDermott said. "Understanding how coding works can help us use technology."

Kyanaliz Santos, a fourth-grader at St. Kateri, said learning to code made her feel good about herself. Coding didn’t come easily to Kyanaliz at first, but she worked hard at it and ended up being the only student in the whole school who was able to use code to solve a puzzle last fall, Sister McDermott said. St. Kateri fifth-grader Calvin Kron and third-grader Matthew Sigler both said they enjoyed coding much more than they’d initially thought they would, and all three students said they would encourage other students to learn to code.

"Give it a try," Kyanaliz said. "It might be hard in the beginning, but it gets easier."