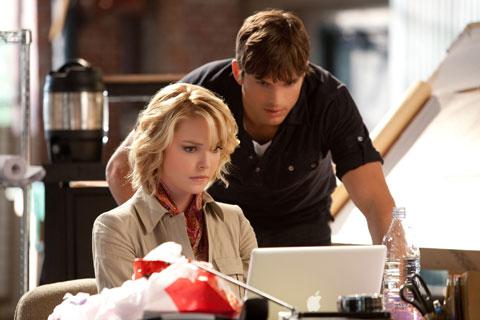 NEW YORK (CNS) — "Killers" (Lionsgate) is very much the definition of mindless fun, if you enjoy virtually any of Ashton Kutcher’s antics.
?
Director Robert Luketic and screenwriters Bob DeRosa and Ted Griffin play explosions, gunfire and car crashes by rote in this lightweight combination of marital comedy and espionage thriller, which is alternately derived, borrowed and outright filched from "Mr. and Mrs. Smith" and many others of the genre.
?
If you’re not familiar with that film, you’ll neither notice nor mind, something the filmmakers evidently are counting on. However, the comic bickering between Kutcher and co-star Katherine Heigl, which is supposed to be the bright shining center, is mostly stale and insipid. No wisecracking classic, this.
?
Kutcher plays Spencer Aimes, a glamorous killer-for-hire used by American intelligence agencies. He meets Jen Kornfeldt (Heigl), a prim computer analyst with overprotective parents (Tom Selleck and Catherine O’Hara), while they’re all in Nice, France, and he’s on a job.
?
He and Jen quickly fall in love, he sees a chance to get out of the assassin trade, and three years later and now married, he runs a contracting firm in suburban Atlanta, with her parents living nearby. They try to live a quiet, upscale domestic life surrounded by a panoply of comic hobgoblin neighbors.
?
Here comes the twist: Spencer now has a $20 million bounty on his head, and the neighbors are all embedded assassins, impressively deft with weaponry and speeding pickup trucks. Shoot-’em-up high jinks, occasionally comedic, ensue.
?
The film contains fleeting crass language, mild sexual banter, and all violence is played for comic effect, making this acceptable for older adolescents. The Catholic News Service classification is A-II — adults and adolescents. The Motion Picture Association of America rating is PG-13 — parents strongly cautioned. Some material may be inappropriate for children under 13.
?
– – –
?
Jensen is a guest reviewer for Catholic News Service. More reviews are available online at www.catholicnews.com/movies.