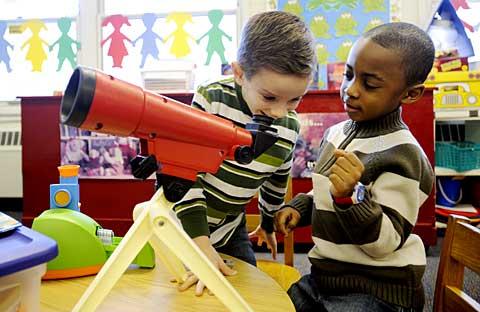 Tina Conroy of Greece noted that it hasn’t been that long since she was in kindergarten.

Even so, she said she has been amazed as she observes the education her 6-year-old twin boys Joey and Paulie are getting at Irondequoit’s Christ the King School. It is the same amazement she felt when her daughter Marissa, now a fourth-grader at Christ the King, attended kindergarten at the former Catherine McAuley School in Greece.

When Tina Conroy was in kindergarten about three decades ago, she was in a half-day program. Now, students are in class for a full day. By the end of the year, today’s kindergartners have spent time counting by ones, twos, fives and 10s. They are able to do simple addition and subtraction, recognize a list of frequently used sight words and have tried their hand at writing sentences, among other skills.

Conroy remembers learning these things in first and second grades — not kindergarten.

"It’s amazing all the things they have learned," she remarked.

On one December day in kindergarten class, Paulie Conroy began his day by handing teacher Helene Coon a drawing he did of Christ the King with the sentence "I like to go to school" written on it.

A greeting like this may be one reason why Coon gushes about her job and her students.

"They are so precious," Coon said. "I think that’s what I love so much. Every day is an adventure. They come to school with a smile. They are sponges and they want to learn."

To help students get into the learning mode as they arrived at school that day, Coon started off working with small groups on instructional-focused play.

In one area, students built a force field out of wooden blocks stacked in a large rectangle. Coon noted that blocks teach students to recognize patterns. In another area, students were drawing, which exercises their literacy skills and fine tunes their motor skills, she said. In another area, they dressed up in play clothes, learning how to take turns and interact socially.

"Play is very, very important because they need to have those social skills and learn to take turns," Coon said.

After they picked up their areas, Coon called out for the students to sit "crisscross applesauce" — cross-legged — on the floor in front of the classroom’s digital whiteboard.

She then asked students to look for patterns in a series of letters displayed on the whiteboard. Next, Coon opened up a digital calendar on the whiteboard and the students begin to catalogue the day’s weather. The students decided it was breezy, and Coon had them demonstrate how trees move in windy weather.

A discussion about the upcoming first day of winter on Dec. 21 transitioned into a quick review of ordinal numbers. As Coon pointed out that it was the second week of Advent, students began to discuss Advent and Christmas.

Tina Conroy said that the incorporation of religion throughout her children’s day is one reason why she has chosen Catholic school for her children.

"They teach you values that are not emphasized in the public schools, nor can they be taught in a textbook," she said.

Religion also is a key component in Jean Mercandetti’s kindergarten class at St. Mary School in Canandaigua. Prayers are incorporated throughout the day, and they pray a decade of the rosary daily.

"In terms of what we teach in religion, we talk to the piece of what would Jesus do, and that kind of colors the classroom," Mercandetti said.

St. Mary students also begin taking Spanish in kindergarten. In addition to instruction time set aside for Spanish, Mercandetti’s students hear Spanish incorporated into their daily lessons. For instance, when she calls on students seated on a red row on a multicolored carpet, Mercandetti refers to them as the rojo row.

"This is a great time to learn a foreign language because your mind is open to so much," she said.

Students also spend time learning to write and read what they have written and to build foundations of scientific and mathematical thinking. For instance, they learn how to measure using nonstandard measurements and graph their results. Mercandetti explained that a typical experiment might be to measure a book using paper clips. Students also enjoy learning how to count and how to handle play money in the class store, she said.

The store is an example of how kindergarten has changed since Mercandetti began teaching, she said.

"It’s not play like it used to be," she noted. "It’s a very direct, instructional-associated play."

Some things about kindergarten haven’t changed, though. For instance, students still have a rest time built into their day, Mercandetti and Coon said. A quiet time — with or without sleep — is even more important now that kindergartners are in school for a full day, Mercandetti noted.

"I think you need to have a bit of recharging," she said.

That is one of several points in which she is in agreement with author Robert Fulghum, who mused about kindergarten’s universal importance in the essay "All I Really Need to Know I Learned in Kindergarten." Mercandetti said she is a big fan of the essay and displays it on a poster outside her classroom. She also based a 2008 speech to St. Mary’s eighth-grade graduating class on some of the essay’s highlights, since she had many of the students in kindergarten.

"It’s so important to carry those qualities you learned in kindergarten through the rest of your life," Mercandetti said. "We do need to be nice to each other and be polite to each other. When we forget these things, that’s when problems develop in the world."