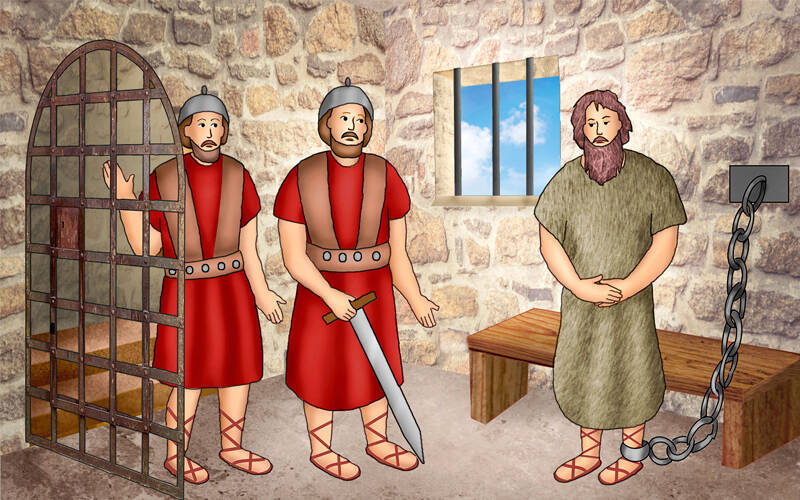 John the Baptist appeared in the desert. He dressed in clothes made of camel’s hair, wore a leather belt around his waist, and ate locusts and wild honey.

John began preaching to the people, proclaiming a baptism of repentance for the forgiveness of sin.

The inhabitants of Jerusalem and the entire Judean countryside came to John so he could baptize them in the Jordan River.

“One mightier than I is coming after me,” he told the people. “I am not worthy to stoop and loosen the thongs of his sandals. I have baptized you with water; he will baptize you with the Holy Spirit.”

One day, John called out King Herod for the sin of marrying a woman named Herodias, who had been his brother’s wife.

“It is not lawful for you to have you brother’s wife,” John told Herod.

Herodias held a grudge against John for what he had said. She wanted to kill him but was unable to do so.

Herod, on the other hand, feared John, so he kept John in custody. He also liked to listen to John, although his words perplexed the king.

One day, Herodias gave a banquet for Herod’s birthday. The leading men of Galilee, military officers and courtiers were present to help celebrate.

Herodias’ daughter performed a dance that delighted Herod and his guests.

The girl went to her mother.

“What shall I ask for?” she wanted to know.

“The head of John the Baptist,” Herodias replied.

The girl hurried back to the king.

“I want you to give me at once on a platter the head of John the Baptist,” she told Herod.

Herod was deeply distressed, but because he had made his promise to her in front of so many important people, he did not want to go back on his word.

When John’s followers found out about his execution, they took his body and laid it in a tomb.

2. Who wanted to kill John the Baptist?

One day, John was surprised when an unexpected person came to him and wanted to be baptized.

In Matthew 3:13, we read that Jesus came from Galilee to John at the Jordan River. John had been baptizing people there for the forgiveness of sins.

When John saw Jesus approaching him, he was stunned. He could not believe that Jesus had come to him to be baptized.

John was baptizing people who were sinners and needed to repent. However, John recognized Jesus as the Messiah, and he knew that Jesus was without sin.

So, at first, John protested.

“I need to be baptized by you, and yet you are coming to me?” he asked Jesus incredulously.

“Allow it now, for thus it is fitting for us to fulfill all righteousness,” Jesus replied.

John did what Jesus said and baptized him.

When Jesus came up from the water after he was baptized, something very special happened.

The heavens opened and the Holy Spirit descended like a dove and came upon Jesus.

Then a voice from heaven spoke.

“This is my beloved Son, with whom I am well pleased,” the voice said.

St. John Gabriel Perboyre was born in France in 1802. He was drawn to missions, so he joined the Congregation of the Mission in 1818.

After his priestly ordination in 1826, he was assigned to perform seminary formation work in France.

In 1835, he finally was sent on a mission to China. For two years, he rescued abandoned children and taught them Christianity.

He was forced into hiding in 1839 because missionaries in China were being persecuted. He was turned in by a recent convert to Christianity, but he refused to betray other missionaries or trample the cross.

Using the hints provided from Matthew 3, fill in the blanks in the sentences about John the Baptist.