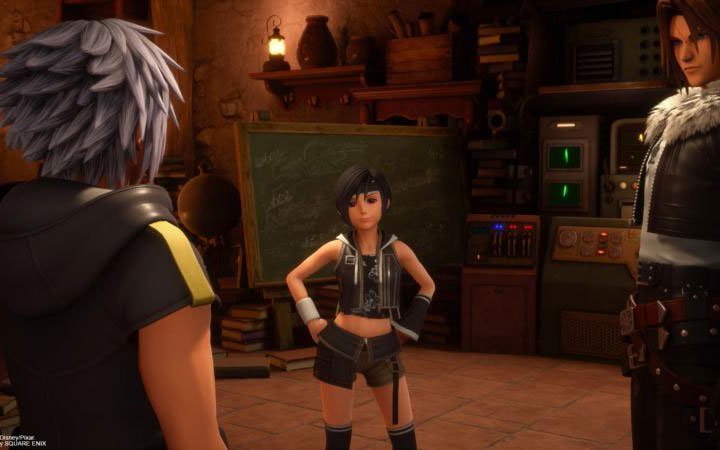 This is an image from the video game "Kingdom Hearts 3: Re Mind." (CNS photo by Square Enix)

Creator Tetsuya Nomura has answered their pleas for new downloadable content (DLC) with the release of “Kingdom Hearts 3: Re Mind” (Square Enix).

The first chapter of “Re Mind” takes place during the end battles of “Kingdom Hearts 3” and sees the protagonist, teen Sora (voice of Haley Joel Osment), trying to rescue his best friend, Kairi (voice of Alyson Stoner), whose heart has been stolen by the wicked Xehanort (voice of Christopher Lloyd).

Sora must travel through the hearts of his other friends reliving their experiences of the final battles in order to discover the fragmented pieces of Kairi’s heart and make it whole again.

Gamers can also play as other characters, Riku (voice of David Gallagher), Axel (voice of Quinton Flynn) and Roxas (voice of Jesse McCartney) among them. These fighters do not have the expansive combat options that come with Sora but do provide further opportunities for players to test their skills.

The main story line of “Kingdom Hearts 3” concludes with Sora’s disappearance. The second half of the DLC picks up after this point.

It’s a year later, and Sora’s pals are still trying to locate him. To do so, they revisit battle memories and fight against supercharged bosses — adventures that will prove a challenge for even the most seasoned gamers.

One of the most common complaints about “Kingdom Hearts 3” was the lack of such demanding content. “Re Mind” includes two new modes called FastPass and Black Code, which allow players to customize the difficulty they experience.

FastPass allows for modifications to make the game easier, which is ideal for youngsters or for those who simply want to enjoy the story. Black Code does the opposite and can make the playthrough a grueling and punishing experience for those who want to run a gauntlet.

The DLC also includes an update to the combat system, giving it a much-needed polish. There are new combo attacks and new weapons, making the overall game mechanics smoother.

“Re Mind” is free of coarse language and graphic violence. And it conveys plenty of positive messages as it celebrates the power of love, friendship and self-sacrifice.

While the extensive lore in the background of “Kingdom Hearts” makes it a daunting series to begin, “Re Mind” is a worthy addition for veteran fans. Newcomers, however, might be better off skipping this purchase until they’ve explored the franchise from the beginning.

Playable on PlayStation 4 and Xbox One.

The game contains cartoonish violence and some whimsical magic. The Catholic News Service classification is A-I — general patronage. The Entertainment Software Rating Board rating is E-10+ — for ages 10 and up.