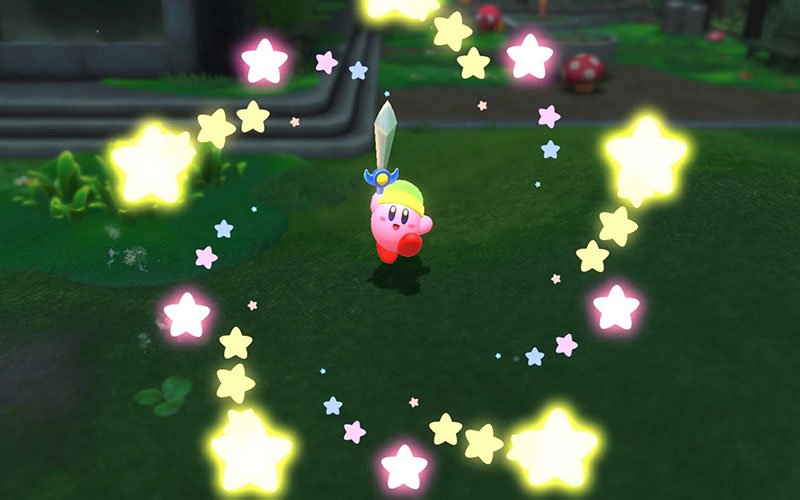 This is a scene from the video game "Kirby and the Forgotten Land." (CNS photo by Nintendo)

NEW YORK (CNS) — How much staying power can a character who’s nothing more than a tiny, animated pink sphere display?

Well, “Kirby and the Forgotten Land” (Nintendo) is the 17th mainline game in the family-friendly franchise built around the titular protagonist, who made his debut way back in 1992.

As the action opens, Kirby is happily enjoying his life when a strange storm engulfs not only him but many others, depositing them in a region known as the New World. There, as Kirby shortly discovers, a gang of natives called the Beast Pack are kidnapping the Waddle Dees, little orange creatures who also were thrust unwillingly into this alien realm.

To rescue the Waddle Dees and defeat the forces of evil, Kirby uses his trademark power to swallow enemies and absorb their abilities. Every time a Waddle Dee is saved, a piece of their town gets rebuilt. These new buildings provide access to minigames, shops and more power-ups, which can be used in later battles.

Kirby engages in frequent fights, employing swords, hammers and even weaponized traffic cones. But the resulting combat is so stylized that it’s silly rather than grim. Defeated opponents merely disappear in a puff of smoke and stars.

Gameplay encourages teamwork since cooperation is the key to completing each level. Although Waddle Dees and their leader, King Dedede, have sometimes featured in past titles as Kirby’s adversaries, moreover, he is still willing to help them no matter what the personal cost. These lessons in forgiveness, self-sacrifice and persistence will resonate with players of all ages.