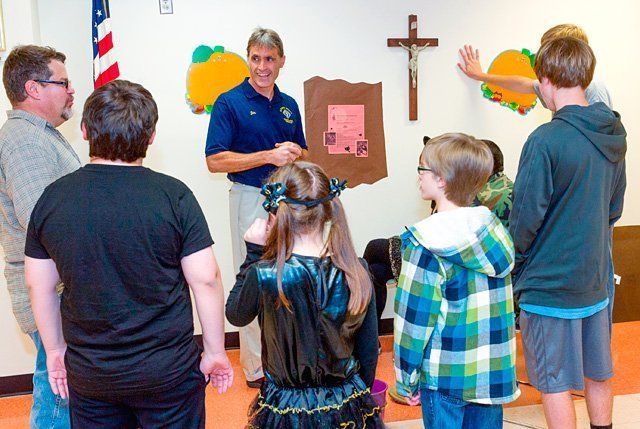 Jim Walsh (center), financial adviser for Knights of Columbus Council 251, tells youths about the religious history of Halloween during an Oct. 28 Halloween party held by the Knights at St. Patrick Church in Owego.

The latest Knights of Columbus council to surface in the Southern Tier is thriving, and there may soon be an additional council on the scene as well.

This activity has not gone unrecognized. Council 251 recently earned its first-ever Columbian Award, issued by the Supreme Council — the Knights of Columbus governing body — for exceptional service in the areas of church, community, council, family, pro-life and youth activities.

"Receiving this award is special for our council because we are small, but we have been able to put together quite a few special events," said Phillips, whose council has approximately 30 members. "All the Knights of our council have contributed."

More important than the honor, Phillips said, is the good that comes out of the Knights’ many endeavors: "The largest part of being a Knight is charity. For myself, being a member enables me to feel that I make a difference in our community, and that we help to make a difference in people’s lives."

Similar Knights of Columbus activity could be on the horizon in Schuyler County, where efforts are being made to establish a council. An informational session was held Oct. 20 at St. Mary of the Lake Church in Watkins Glen, with Jim Hackett, District 86 deputy, giving a presentation.

According to Hackett, there are currently 15 or so members toward the minimum number of 20 required by the Supreme Council to start a local council.

"I’m sure that in time, a council will become a reality," Hackett said, pointing out that it took nearly two years to get the Owego council going, whereas the initiative in Schuyler is only a few months old.

"We have some very active members, and I’m sure that they will work hard to promote the council in Watkins Glen. It would be great for the parish (Schuyler Catholic Community) and the community," added Hackett, who resides in Elmira and belongs to Council 229 there.

Should the Schuyler council come to fruition, it would mark the resurrection of a group that has been dormant for many years. This would follow a similar outcome as the Tioga council, which had disbanded in 1979 before its relaunch two years ago.

The Knights of Columbus, open to men age 18 and up, is the world’s largest Catholic fraternal organization. Along with Tioga and Elmira, the other councils in the Southern Tier are Father James Early Council 243, Hornell; Council 277, Ithaca; Council 281, Corning; Precious Blood Council 5147, Bath; Council 6158, Horseheads; and Father Andrew W. Teuschel Council 11538, Dansville. Of special note is the Corning Council, which was recently issued the Star Council Award by the Supreme Council for outstanding service as well as reaching quotas for membership and the Knights of Columbus insurance program.

Hackett noted that the Elmira and Corning assemblies combine to provide an honor guard every time Bishop Salvatore R. Matano visits area churches for special occasions. Recent examples include a Mass on Oct. 11 at Elmira’s St. Casimir Church to celebrate anniversaries for that church as well as St. Charles Borromeo and Our Lady of Lourdes; and a liturgy on Oct. 31 in All Saints Parish, Corning/Painted Post, to honor the Feast of All Saints.