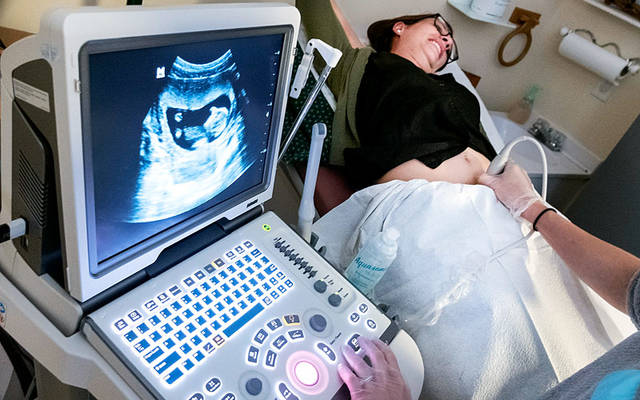 Laura St. John receives an ultrasound from Rachael Atwood, a registered nurse, at the Ithaca Pregnancy Center Sept. 7. Knights of Columbus fundraising efforts made the purchase of the new machine possible.

Among the Knights of Columbus’ many pro-life initiatives, funding the purchase of ultrasound machines for pregnancy centers ranks high on the organization’s list.

And for good reason: The availability of such devices could well make the difference in a mother choosing life for her unborn child, asserted Rhonda Mapes.

“She sees her baby (in an ultrasound image), and that speaks louder than our words,” said Mapes, who serves as executive director of Crisis Pregnancy Centers of the Finger Lakes Inc. The organization operates two facilities: Ithaca Pregnancy Center and Cortland Pregnancy Center.

Fundraising by the Ithaca Knights took place over a year’s time and included such local efforts as a pasta dinner, pancake breakfasts and personal donations, according to Peter Romani, who serves as current grand knight of Council 277.

“This is a big thing for the Knights. We just felt that this (fundraising effort and its cause) was very important,” said Romani, a member of Ithaca’s Immaculate Conception Parish.

A dedication for the new ultrasound machine and an open house took place June 24 at the pregnancy center, located at 210 W. Green St. Numerous Knights of Columbus were on hand for the event, and Romani noted that Bishop Salvatore R. Matano contacted him with congratulations as well.

Ithaca Pregnancy Center, which opened in 1988, has provided ultrasounds since 2005. However, Mapes said that the center’s previous ultrasound machine had become antiquated and was prone to breakdowns. The timing of its replacement, she remarked, “was so providential. The old machine broke about three weeks before the new one was up and running.”

Mapes added that the new machine also offers updated technology: “The pictures are much clearer. It’s easier to find the (baby’s) heartbeat.” In addition, it is portable, allowing for staff nurses to take it to training sessions and also for it to be transported to Cortland Pregnancy Center — located in the Diocese of Syracuse — if there’s a problem with that facility’s ultrasound machine.

On the other hand, the odds of a breakdown in Cortland have been greatly reduced, since that office also has received a new machine. It arrived in late July, with Knights of Columbus Cortland Council 233 helping to arrange funding.

Mapes said that having the ability to see a baby’s image via ultrasound greatly enhances the likelihood that a mother will keep her unborn child, even if she has been considering abortion. She explained that in addition to the loss of a life occurring through abortion, “many women have emotional and spiritual complications if they choose abortion.”

“If it’s seven weeks (into the pregnancy), you may see arms and legs moving, a heartbeat. Then it’s very hard for woman to say, ‘I’m going to go out and get an abortion,’” Mapes said, calling an ultrasound device “a tool in the toolbox, a very powerful one where you see God operate in powerful ways.”

Many of these powerful tools have been made available through the Knights of Columbus. Since 2009 the organization has supported the purchase of several hundred ultrasound machines nationally, with Supreme Council covering 50 percent of a machine’s cost and local councils securing money for the remaining half.

“No way we could have done this without them,” Mapes said of the Ithaca Knights of Columbus, adding that the new machine in that city’s pregnancy center “is fantastic and will serve us for many years. It was a pleasure working with those men. I cannot say how much we appreciate it.”