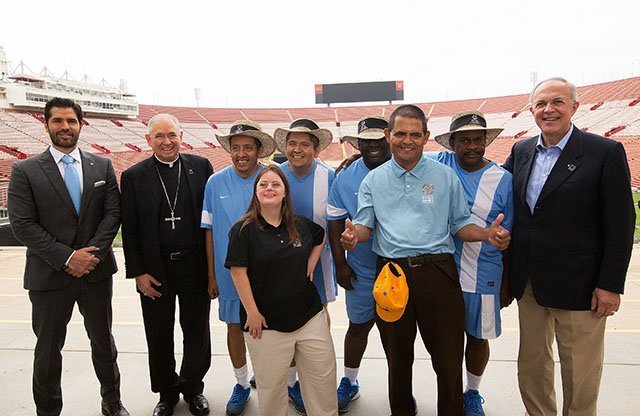 The donation, announced July 14 in Los Angeles, will help cover on-the-ground costs for the 7,000 participants expected to compete in the games.

The contribution covers more than 8 percent of the Special Olympics’ projected $17 million budget for the 2015 games. Supreme Knight Carl Anderson, the head of the fraternal organization, told Catholic News Service that the donation would cover the costs of all Americans and Canadians expected to participate.

In tandem with the Knights’ announcement, Archbishop Jose H. Gomez of Los Angeles outlined the archdiocese’s spiritual support for the athletes attending the games.

Mass will be celebrated daily, but efforts will also be made to open up Los Angeles Catholics’ homes to athletes and coaches.

"A big part of Special Olympics is athletes’ interaction with the community around the sponsoring city," Anderson said. "That’s going to be very important."

He added, "I remember having the opportunity to meet with Sarge in Dublin for first the Special Olympics international games that were held outside the U.S. That was a special occasion to be with him. That was in 2003."

As large as the Knights’ gift is to Special Olympics, it is dwarfed by the contributions made by members of the Knights at the state and local levels.

Contributing to this story was Mark Pattison in Washington.