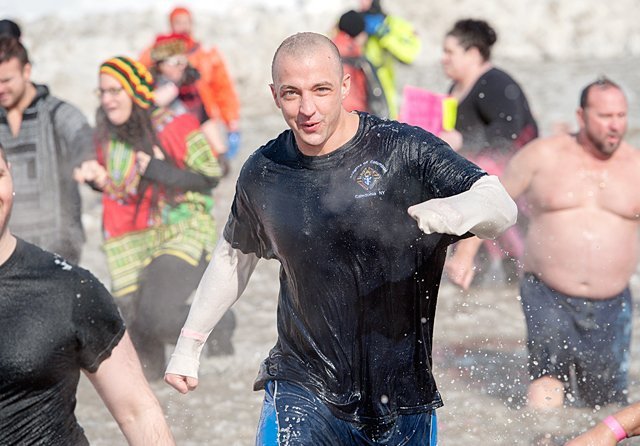 Kris Ayers, a member of Knights of Columbus Council 7980 in Caledonia, runs out of Lake Ontario after submerging himself during the annual Polar Plunge, which was held at Rochester's Ontario Beach Park Feb. 14.

ROCHESTER — A brief epidemic of insanity broke out Feb. 14 at Ontario Beach Park, affecting some 1,800 people.

The symptoms? Charging across the sand whooping and hollering, wearing creative costumes and skimpy swimwear despite air temperatures just above zero — and then stepping into frigid Lake Ontario.

As if those actions weren’t loony enough, Kris Ayers went one step further. He waded out past a large percentage of participants who, after dipping their feet in, had seemingly come to their senses and gotten right back out. Ayers, on the other hand, was among the few who went completely under water for a brief moment — thus living up to the name of the event: Polar Plunge.

"You have to figure, people are paying me to get in there. So I got in there," Ayers explained while changing into dry clothing a few minutes after taking his plunge.

The pay he mentioned came in the form of donations, collected by the approximately 200 Rochester Polar Plunge teams to benefit Special Olympics New York. Ayers headed up the self-proclaimed "Frozen Knights" representing Knights of Columbus Father William Devereaux Council 7980, based at St. Columba Church in Caledonia.

The day started out serenely enough, with many team members meeting for 8 a.m. Mass at Scottsville’s St. Mary of the Assumption Church before setting out for the Charlotte neighborhood at the other end of Monroe County. There they met up with two other Knights of Columbus plungers, TJ Wasik and Saul Fernandez from Rochester Institute of Technology Council 14336, who were decked out in full knights’ costumes including helmets and swords. 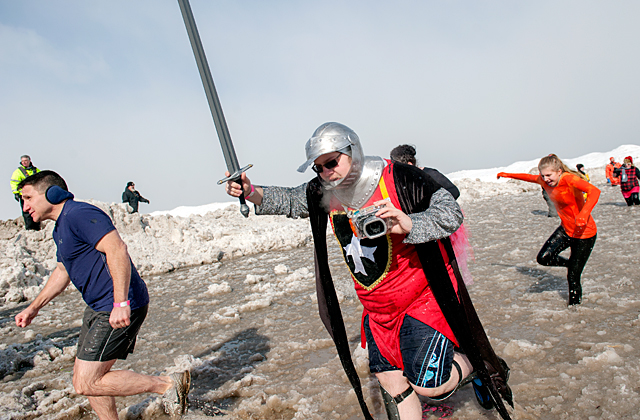 Plungers embarked on their mission at high noon by filing out of a large heated tent onto Ontario Beach, where despite sunny skies, bitter air awaited them courtesy of the coldest weekend by far in an otherwise unusually warm winter.

"I saw the forecast and said ‘Are you kidding me?’" Bennett remarked.

Participants then walked down to a section of the shore where enough ice had been cleared away to expose the water; there they waged a frigid battle of mind over matter. The main event was over in a matter of minutes as plungers hurriedly entered and exited the lake. Despite towels being distributed by volunteers to ward off frostbite and hypothermia, there were still plenty of red-skinned folks seeking warmth back in the tent.

"Awesome" was Bennett’s reply upon being asked how the water had felt.

This marked the fifth year of Council 7980’s participation in the annual Polar Plunge. Ayers, 31, has coordinated the efforts for each one, noting that he was drafted as the pioneer Polar Plunger in 2012 due to being one of the council’s youngest members. Since then the council has raised several thousand dollars for the event, in keeping with the Knights of Columbus’ reputation as a major sponsor of Special Olympics worldwide.

Ayers noted that this year’s Frozen Knights raised approximately $2,240, placing in the top 25 of all Polar Plunge teams, with RIT producing an additional $385. In all, the Rochester Polar Plunge — for which the Knights of Columbus serves as a sponsor — has raised millions of dollars for Special Olympics since its inception in 2001.

Ayers observed that the Polar Plunge brings out a side of the Knights of Columbus not often seen. Open to men ages 18 and up, it is the world’s largest Catholic fraternal organization and renowned for its spiritual, service and charitable efforts.

"The Knights are for everyone," Ayers said in noting the recruiting value of such an initiative. "This is a bunch of younger guys having fun."

However, by 12:30 p.m. the Frozen Knights had experienced quite enough fun for one day, leaving Ayers with only one goal remaining.

"I’m going to go home and get my feet in some hot water," he stated.