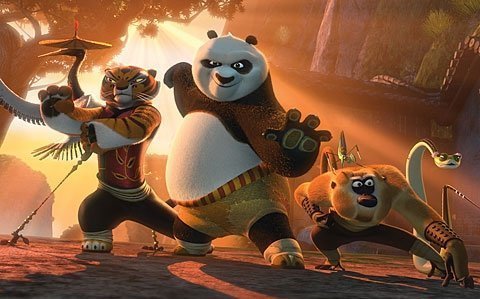 Perfunctory if unobjectionable, this follow-up to 2008’s hit about a rotund bear with martial-arts prowess moves at a brisk pace. Adults have that to be thankful for, along with the absence of inappropriate material.

When we meet up again with the goofy, perpetually hungry Dragon Warrior Po (voiced by Jack Black), he’s firmly established as protector of the Valley of Peace, yet curious about his identity. It’s finally dawned on the lovable oaf that Mr. Ping (James Hong), a goose, is probably not his natural father.

This desire to learn about his origins coincides with the rise of the power-hungry peacock Lord Shen (Gary Oldman). Armed with a new class of mechanized weaponry, Shen seeks to conquer all of ancient China. But a soothsaying goat (Michelle Yeoh) predicts he’ll be thwarted by a practitioner of kung fu with whom he has a history.

Indeed, flashbacks to Po’s earliest days reveal Shen was responsible for the death of his parents during a raid on their village. With Master Shifu (Dustin Hoffman) counseling him to strive for inner peace, Po and the Furious Five (Angelina Jolie, David Cross, Seth Rogen, Lucy Liu and Jackie Chan) set out to derail Shen’s evil plan.

Director Jennifer Yuh Nelson oversees by-the-numbers visuals, available in 3-D, while imparting an anodyne message concerning the necessity of moving beyond the past and focusing on the present.

The emphasis on pratfalls and breezy jokes will prevent wandering attention spans, but at a price. What felt relatively original and distinguished by fresh aplomb three years ago now seems to lack both flair and substance. Of course that’s never stopped the studios. Judging by the ending of "Kung Fu Panda 2," part three is in the offing.

The film contains mild fantasy violence. The Catholic News Service classification is A-I — general patronage. The Motion Picture Association of America rating is PG – parental guidance suggested. Some material may not be suitable for children.