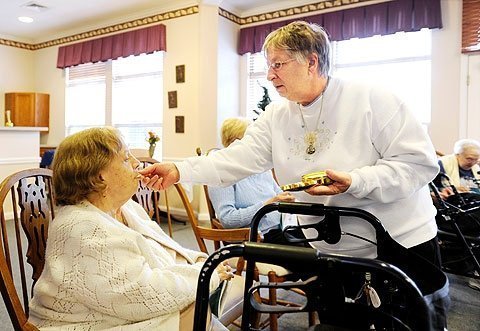 Eileen Walsh (right), a parishioner of Our Mother of Sorrows Church in Greece, gives Communion to Martha Distante during a Nov. 22 service at Crimson Ridge Meadows, a senior-living community in Greece.

Eileen Walsh had a brief yet moving encounter with a distraught woman while bringing Communion to nursing-home residents a number of years ago.

"I said, ‘Why are you crying?’" Walsh recalled. "She said, ‘Eileen, I used to go to Mass every day and now it’s once a month. It breaks my heart.’"

For Walsh, the woman’s remark shed significant light on the spiritual needs of the elderly, sick, disabled and homebound — people who no longer attend church whenever they wish, but can only access sacraments when brought to them. With the senior-citizen population growing amid an era of declining priest availability across the United States, it can be a daunting challenge to plug holes in sacramental availability at hospitals, nursing facilities, retirement communities and private homes.

Helping to address this dilemma has been the nearly 40-year-old Vatican edict that laypeople may serve as extraordinary ministers of holy Communion. Walsh, for one, was spurred by her conversation with the tearful woman to expand her ministry, which she has performed weekly for more than a decade.

Walsh had a full morning of volunteer duty Nov. 15, which she began by picking up consecrated hosts from Our Mother of Sorrows Church in Greece along with bulletins to bring to nursing-home residents. From there she led three Communion services: for 16 residents of Crimson Ridge Gardens, for five at the adjoining Crimson Ridge Meadows and for four at Resch Commons a bit more than a mile away. Each service lasted approximately 25 minutes and consisted of prayers, intentions and the distribution of Communion to each participant who wished to receive it. Walsh also brought Communion to the rooms of several individuals who were physically unable to attend the services.

She noted that none of these three facilities holds Mass regularly, even though many residents tell her they miss attending church — especially on Sundays. Still, it was obvious from her Nov. 15 appearances that participants were grateful to receive Communion.

"Thank you so much for coming," Walsh said to folks as her service at Crimson Ridge Meadows ended.

"Thank you so much for coming," one resident responded.

According to the National Center for Health Statistics, life expectancy in the United States increased from 70.8 years in 1970 to 77.9 years in 2007. However, a 2007 Catholic Courier story noted that the number of active priests in the Diocese of Rochester had fallen by that time to 197 from an all-time high of 440 priests in 1967.

The restoration of the permanent diaconate in this diocese, begun in 1982, has helped in maintaining ministry to the sick and elderly. For example, both of the diocese’s Catholic hospitals are served by deacon chaplains — Deacon Robert McCormick at St. James Mercy in Hornell and Deacon George Welch at St. Joseph’s in Elmira — whereas those positions were once held by priests.

In 1973 Pope Paul VI issued the instruction Immensae caritatis, which allows a diocesan bishop to designate lay men and women for distribution of Eucharist — both at Mass and in the wider community — when not enough clergy are available to fill the demand. When bringing Communion from church, extraordinary ministers transport hosts that have been consecrated by priests in special vessels known as pyxes. Homebound Catholics can receive Communion from friends or family members, or from trained parish volunteers in individual and group settings.

Father Thomas Mull, for one, said he relies heavily on numerous extraordinary ministers of holy Communion to meet sacramental needs at St. Mary in Canandaigua and St. Bridget/St. Joseph in East Bloomfield, where he is pastor.

"They’re very, very generous," he said, pointing out that his coverage area comprises nine nursing homes and one hospital, and that he only has time to say monthly Mass at a handful of those facilities.

Walsh noted that a number of Our Mother of Sorrows parishioners are involved in similar ministry, bringing Communion to hospitals, private residences and nursing facilities. Meanwhile, Elmira churches have teamed up in recent years to plug sacramental gaps at hospitals and skilled nursing facilities as a result of reduced priest availability. Rose Bennett, pastoral associate for homebound, shut-ins and hospitals at Elmira’s Blessed Sacrament Parish, said the churches have enough volunteers to ensure that people requesting Communion can receive it at least once a week. Bennett added that she informs her pastor, Father Rick Farrell, of people who also need anointing of the sick or the sacrament of reconciliation, two sacraments that can only be performed by a priest.

Bennett said this month her parish ministry is giving a postcard along with a Christmas plant to each person who is visited. The cards are to be returned, indicating whether recipients feel they’re being seen often enough — "just to see what the needs are. At least they know we’re here," Bennett said.

Maintaining such communication has been especially important since 2003, when the federal Health Insurance Portability and Accountability Act (HIPAA) took effect. The act limits the amount of private information released by hospitals and nursing facilities. Since its passage, parishes have had to urge patients and facility residents — or their loved ones, friends or nurses — to keep parish staff informed of sacramental needs since information is no longer freely available from health-care facilities.

A sense of obligation

Mass is rarely celebrated on any regular basis at hospitals, nursing facilities and adult residences in the Rochester Diocese. Exceptions are St. Ann’s Community in Rochester, which offers Mass on Sunday and most weekdays for its historically Catholic population; St. Joseph’s Hospital in Elmira, which holds weekday Masses regularly; and The Legacy at Park Crescent in Greece, where Father Winfried Kellner, a retired priest, celebrates Mass every Tuesday and Friday.

"One reason I chose this (living facility) was because of Mass," Legacy at Park Crescent resident Lucille Adam-Rene said following Father Kellner’s liturgy on All Saints Day Nov. 1.

"This works very well for me. I’m past 90 (years old) so I can’t get to church the way I used to. It’s wonderful," added fellow resident George Kraus, who was among approximately 50 people who attended the liturgy.

"We are very blessed here, except I wish we had it on Sunday," added Michelina Erb, another Mass-goer on Nov. 1. She then turned to Father Kellner and asked, "Father, why can’t you come on Sunday?"

"It’s the best we can do," Father Kellner replied, explaining that he has weekend sacramental duties at Our Mother of Sorrows.

Erb’s sentiments are representative of many Catholics who — no matter their age or circumstances — never lose the sense of obligation and desire to attend Mass, even though Canon 1248.2 of the Code of Canon Law exempts people impaired by age, illness or disability from the obligation.

"My mother had terrible dementia. The only thing she remembered is she had to go to church on Sunday," Bennett remarked. "To her dying day, she said, ‘Is it Sunday? I have to go to church.’"

One way to ease such anxiety is for people to tune in to television and radio Masses — originating both locally and nationally — that are available in several parts of the diocese.

"There’s that identity with the community. Even though they can’t physically be there, they feel they are there," said Father Mull, longtime celebrant of the weekly Mass that airs Sunday mornings on WHEC-TV 10 in Rochester (see related story). He emphasized that people who follow TV or radio Masses should be receiving Communion regularly as well.

Walsh and Bennett said new extraordinary ministers of holy Communion are always welcomed, since greater numbers of volunteers allows more people to receive Eucharist more often. Walsh said having lots of volunteers is vital because of scheduling issues, noting that it’s not always easy to maintain continuity in a ministry in which availability of volunteers and needs of would-be Communion recipients are always changing.

The payoff for these efforts, according to Bennett, is witnessing how grateful people are to have the body of Christ brought to them.

"They’re thrilled that somebody, anybody from the parish comes. ‘Where’s Father’ — I hardly ever get that," Bennett said, adding that "there’s nothing better, especially if you’re sick and can’t get out of your house, than to receive Communion. When you go into an intensive-care unit these people are in such need — if you even put a little particle of a host on the tongue, then the tears come. It means so much to them to be able to receive our Lord."

Father Mull said the companionship offered by these visits is another big plus.

"It lets (people) know they’re not forgotten," he said. "When you’re isolated, you can become very aware of that. It’s an intense emotion. But when somebody’s coming to see you, it breaks through that."

"You develop a friendship with these people. It’s not just, ‘Hi, how are you.’ They wait for you to come," Bennett added. She also observed that volunteers tend to be highly committed, including some in her parish who have logged at least 15 years of service: "These people are amazing. I never fail to get a call from one of the ministers saying, ‘I’ll do Christmas.’"

Walsh, with her eyes watering, counted herself among those who are privileged to serve in such a way.

"I have a great love for our Lord and hope I’m doing a good job," she said. "These people mean a lot to me and it makes my week. They help me get through the week. These people lift me up."