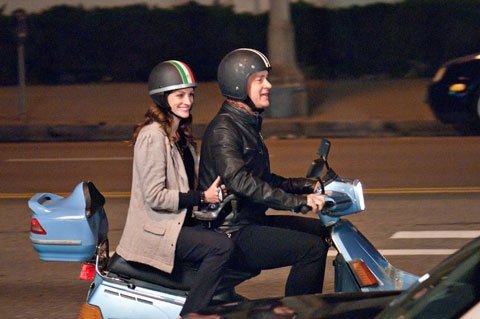 The low-key proceedings are somewhat problematic from a faith perspective, however, since the second chances on offer include not only midlife educational and vocational opportunities, but marital mulligans for both partners in the film’s central pairing.

Hanks plays the title character, a divorced clerk at a Walmart-like suburban chain store whose personable manner and enthusiastic approach to his work fail to prevent his sudden firing. Management’s rationale for this decision? Because he enlisted in the Navy instead of going to college, Larry will always be barred from future advancement in the organization, so it’s better to let him go altogether.

One wonders what the legal staff at Veterans Affairs — not to mention 12 reasonably patriotic jurors — would make of such reasoning. But Larry is too mild-mannered to find out.

Instead he enrolls in his local community college where, after forsaking his gas-guzzling SUV in favor of a beaten-up but economical motorbike, he befriends the members of a student scooter-riding club (led by Gugu Mbatha-Raw and Wilmer Valderrama).

Larry’s personal prospects brighten even further when the instructor for the course in public speaking he has signed up for turns out to be Julia Roberts in the guise of professor Mercedes Tainot. Disillusioned at work, Mercedes is in a bad way; she spends her down time whipping up alcohol-laced giggle juice in the blender and quarrelling with her lazy, Internet porn-obsessed spouse, Dean (Bryan Cranston).

As Larry falls for and charms Mercedes, Dean’s loutishness becomes ever more apparent, until Mercedes has finally had enough and kicks him out. This is clearly a move the script — as collaborated on by Hanks and Nia Vardalos — intends us to applaud since, according to the story’s underlying values, the justified jettisoning of hubby No. 1 clears the way for Larry and Mercedes to stroll into the sunset together.

For better or worse, however, canon law makes no provision for the annulment of a valid marriage based on a wife’s belated discovery that her husband is an oaf.

Larry is every bit the gentleman Dean so obviously is not — as he proves one night while escorting Mercedes home. She has been drowning her sorrows again, and invites him in for a frolic. Larry sticks around long enough to do some necking on the doorstep, but then ends the encounter by seeing to it that Mercedes gets safely inside.

As the socially successful outcome of Larry’s vehicular downsizing demonstrates, this is a film that prizes human connectedness over material goods. To that degree, at least, it’s reminiscent of such Depression-era Hollywood features as the Frank Capra classic "You Can’t Take It With You."

Indeed, "Larry Crowne" even goes so far as to imply that its hero’s upbeat, lemonade-out-of-lemons approach toward his financial woes — difficulties that all too many viewers may currently find it easy to empathize with — ultimately transforms these travails into so many steppingstones to a better, more fulfilling life.

The film contains brief nongraphic but adulterous sexual activity, acceptability of divorce, pornography theme with fleeting suggestive images, a bit of sexual humor, at least one instance of profanity and a couple of rough and some crass terms. The Catholic News Service classification is A-III — adults. The Motion Picture Association of America rating is PG-13 — parents strongly cautioned. Some material may be inappropriate for children under 13.