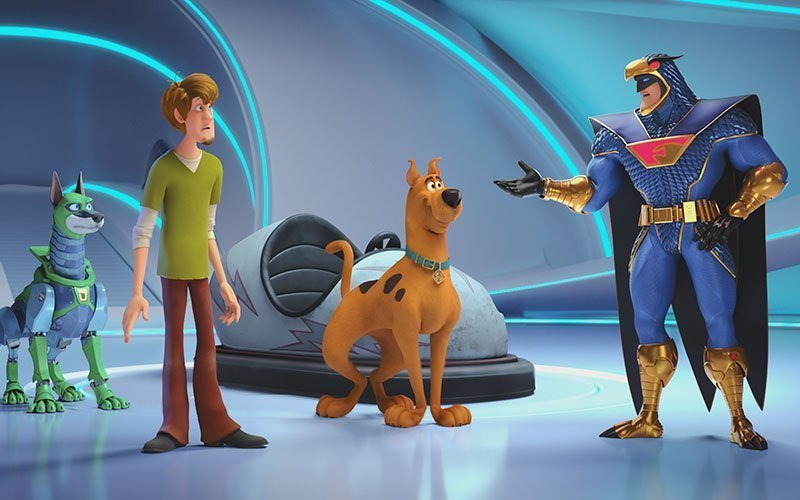 This is a scene from the animated movie "Scoob!" (CNS photo courtesy of Warner Bros.)

NEW YORK (CNS) — Baby boomers may remember whiling away their Saturday mornings, beginning in 1969, by watching the Hanna-Barbera cartoon series “Scooby-Doo, Where Are You!”

Beyond the fact that its ensemble of teen sleuths always discovered a perfectly reasonable explanation for apparently occult events, however, their memories of the show may be blurry.

Many iterations of the franchise later, “Scoob!” (Warner Bros.) arrives as a mostly inoffensive but bland animated feature. Too frightening for little kids, it’s acceptable for most others, though it amounts to little more than a pleasant timewaster.

Director Tony Cervone’s adventure opens with an origins story of the bond between future laid-back beatnik Shaggy Rogers (voice of Will Forte) and his faithful dog, Scooby-Doo (voice of Frank Welker). Early scenes also establish the duo’s friendship with Velma (voice of Gina Rodriguez), Fred (voice of Zac Efron) and Daphne (voice of Amanda Seyfried) with whom they form Mystery, Inc.

Flash forward a decade and trouble looms in the person of reality TV star Simon Cowell (voicing himself) who, in his guise of entrepreneur, is prepared to invest in Mystery, Inc. but sees no role in it, going forward, for cowardly, food-obsessed Shaggy and Scooby. Despite the protestations of their pals, lad and dog, sensing they’re no longer wanted, promptly make themselves scarce.

This is no time, however, to be divided and conquered since the adolescent detectives are soon battling Dick Dastardly (voice of Jason Isaacs), a villain who wants to kidnap Scooby-Doo. Dastardly is intent on using the supernatural power the Great Dane possesses as a descendant of Alexander the Great’s pet pooch for his own purposes.

Fortunately for them, the youngsters get timely help from aspiring superhero Blue Falcon (voice of Mark Wahlberg), his brainy sidekick, Dee Dee Skyes (voice of Kiersey Clemons), and his mechanical pup, Dynomutt (voice of Ken Jeong). Having taken over his persona from his retired dad, though, as-yet untested Blue Falcon lacks self-confidence.

Cowell’s brief presence is perhaps an effort to introduce a timely note to a set-up of the ultimate origins of which stretch back well before the Woodstock era to the 1959-63 sitcom “The Many Loves of Dobie Gillis.”

Some of the characters of that show, as those collecting Social Security may recognize, were recycled for the original “Scooby-Doo,” Shaggy being based on pre-Gilligan Bob Denver’s Maynard G. Krebs. Similarly, Fred’s enduring love for the gaily decorated Mystery, Inc. van has a hippy-dippy, “Partridge Family” feel to it.

Notes of nostalgia aside, “Scoob!” salutes unity, loyal friendship, courage and self-sacrifice. It’s a passable piece of entertainment but not one that makes much of an impression.

The film contains much peril, mature wordplay, a single crass term and brief scatological humor. The Catholic News Service classification is A-II — adults and adolescents. The Motion Picture Association rating is PG — parental guidance suggested. Some material may not be suitable for children.