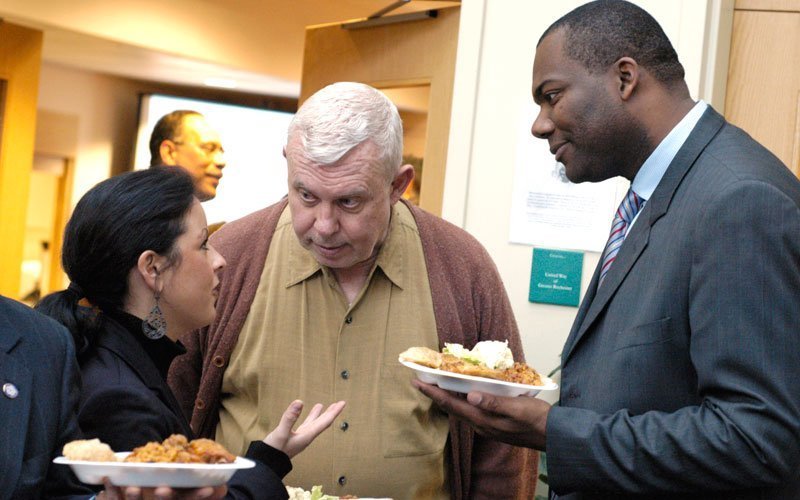 ROCHESTER — Members of the Latino community offered their commitment and support to new Rochester City School District Superintendent Jean-Claude Brizard as he works to raise graduation rates and improve the overall academic performances of students.

The Ibero-American Action League hosted a March 19 meeting at its Ibero Family Center on Clifford Avenue, where more than 50 people officially welcomed Brizard to the community.

“It’s important that the (Latino) community establish that communication with the superintendent,” said Hilda Rosario-Escher, Ibero’s president and chief executive officer. “He’s also made no secret that this will be the start of an ongoing conversation with our community. The greatest gift we can give our children is education. We have to work together to do this.”

Brizard said that he knows firsthand the challenges faced by students who don’t speak English. When his family first arrived in Brooklyn from Haiti, he said that he had difficulty with most of his subjects except for math. But he soon met a teacher who recognized how advanced his knowledge was of subjects not related to English. He said that he quickly moved up, and graduated from high school at 16.

“I walked into a classroom with a teacher who cared and it made me fly,” he added. “When you talk about bilingual (education) and immigrants, it’s all about the teacher and the principal and the support you provide for these kids.”

In the Rochester district, Brizard said that he almost immediately wondered why bilingual students were only being funneled into Monroe and Jefferson high schools. He said that he would rather have bilingual programs at more high schools so, for example, if a student is a dancer or a musician, he or she would have the option of attending the School of the Arts.

“The choices become limited because we’re not bringing services to the kids,” he said. “Language should not be an issue. It should not be a barrier and stop kids from where they’re going.”

Data has already shown, Brizard said, that the drop-out rate jumps for Latino students in ninth grade. He said that he has noticed that if a student transitions out of the bilingual program in the ninth grade, that student will likely graduate from high school. It is evident that students need to become English proficient before they reach high school, Brizard explained. If they do need bilingual services in content area, they need better support than they are currently receiving, he added.

According to information from the district, 41 percent of Latino students graduated during the last school year.

“We need to get to the bottom of this quickly,” he said. “Why are Latinos leaving? … I don’t have the answer, but the data will lead to the work we need to do.”

Brizard said that he also shares the community’s frustrations about having the lowest graduation rates in the state.

“It’s a distinction I don’t want to have anymore,” he remarked.

The students who are dropping out are most commonly between the ages of 17 and 19 — most of them in the ninth grade.

“That speaks disaster,” he said.

Brizard noted that his core values — achievement, equity and accountability — will keep the district focused on the work that needs to be done to change the course for these students.

“They have to go to college to have a shot at a middle-class salary,” he said.

Some of his goals are for teams of teachers and principals to develop curriculum plans that set expectations while allowing for creativity, and adding bilingual programs to more schools while also boosting bilingual students’ English proficiency.

Brizard added that he also would like to build a high school at a local college and has already been in talks with university officials to explore the idea. He also has been in talks with superintendents in urban schools around the country that have high rates of student academic success, such as the Garden Grove district in California, where he expects to send teachers to learn firsthand about its successful strategies.

Because if the district does not turn things around, the impact on the area’s work force will be huge, Brizard remarked.

“The city will die,” he stated.

Father Laurence Tracy, an advocate for Hispanics in Rochester for more than three decades, asked Brizard to remember the Latino community’s need for quality bilingual services in the district.

“We don’t want the bilingual program to be thought of as remedial, for the slow kids,” he said.

Brizard said that he can empathize with students who feel they are not considered as smart as their English-speaking counterparts because they have not yet learned the language.

“The way to get around it is curriculum,” he said. “Expectations need to be clear. Tasks need to be the same.”

Jayme Berm√∫dez, who graduated from Edison Tech High School, said that he hopes Brizard will take into account student input as well. Too often, he said, administrators try to quell their voices and reprimand them for voicing opinions.

Brizard said that he agrees and may institute a program he created when he was a high-school principal that allowed students to speak to him directly and tell him their concerns. He also plans to start monthly meetings with principals.

“It’s about leadership,” he said. “Show me a good school and I’ll show you a good principal. And a good principal has got to be collaborative … and understands the values of (hearing) all voices, especially the ones you serve.”

“For too long, administrators have not been held accountable,” he said. “That is going to change.”