Latino youths connect to their faith through dance - Catholic Courier 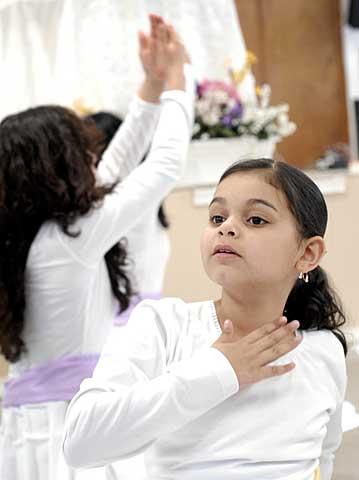 Eight-year-old Nagelys Morales performs with the Our Lady of the Americas Liturgical Dance Group April 11 during the parish's celebration of Divine Mercy Sunday.

ROCHESTER — The young liturgical dancers waited excitedly in a small room off the main parish hall at Our Lady of the Americas Parish.

Mariam Rivera, the group’s director, handed out white flags that would be part of the performance for the newly created group. Parents and fellow dancers wrapped yellow and purple sashes around the girls’ long, flowing white dresses. Two small boys wore white shirts and pants for their April 11 performance at the parish’s first bilingual celebration of Divine Mercy Sunday.

Older girls paired up with younger ones as they lined up and processed to the altar set up in the hall with a Divine Mercy cross and portraits of Jesus and Mary. They then danced to "You Raise Me Up" and "Por el Poder de Dios" ("Because of God’s Power"). Most of the movements were tied to the words in the songs as arms raised and the flags waved in praise.

Luis Rivera, a longtime parishioner, said that liturgical dance is a unique experience for the parish’s Hispanic community.

"But we are open to it with caring and appreciation," he said. "It helps our children to stay interested in the Lord. … It is something very beautiful and engaging."

Father Vincent Panepinto, pastor, said that he suggested the idea for such a group because he loves liturgical dance. While membership was open to any parishioner, most of the girls and boys who responded are Hispanic, which opens them up to a type of dance that is not familiar to them, he added.

"It’s a cross-cultural experience," he said.

Carmen Torres, who has led a dance group at Rochester’s Immaculate Conception Church for the past 12 years, said that many Hispanics are not familiar with liturgical dance.

"As a culture that really respects the holy ground of a church, dancing is more something that happens outside church," Torres said. "It’s not looked upon as something that can be focused or looked at as something positive for prayer."

When she conducts workshops for churches as she did for Our Lady of the Americas, Torres tells parents to think of a priest’s movements during Mass as dance. A priest bows and raises up his arms — movements that are common for liturgical dancers, she noted.

Dance is such a part of the Hispanic culture that bringing the liturgical form to young Hispanics is a way to connect them to their faith, Torres remarked.

"It’s a win-win," she said. "You get kids more involved in church doing something they enjoy doing."

Mariam Rivera said that the Our Lady of the Americas group formed last winter after announcements during Mass and in parish bulletins attracted 13 children and teens. She said that following the group’s first performance for the celebration of the feast of Our Lady of Guadalupe, membership grew to its current total of 25. Participants range in age from 4 to 18.

Rivera added that she had not considered leading the initiative. But when no other volunteers stepped forward, she said that she took the reins because she wanted her son and daughter to have this new experience.

"I stepped up instead of not having a group," Rivera said. "It’s a good way of prayer, and they (children) get into it. They feel more connected to God."

Parishioner Lillian Pagan said that the new dance group has provided a good experience for her daughter and two nieces.

"It teaches her a lot about God," Pagan. "I’m trying to keep her on the right track."

The families involved are truly committed to the endeavor, Rivera observed, as weekly rehearsals take more than an hour and the families had to pay for their children’s outfits and all the props and accessories. She also choreographs all the dances with her sister, Noraimi "Chana" Rivera, and Yessica Chavez, 17.

"You can show your emotions through the movements of the dance. … It’s how we express our faith through dancing," she remarked.